Sixty years ago, as we were coming to an end to 1960, ABC was planning an ambitious variety special to welcome 1961.

Sixty-One, Here We Come! was a 65-minute program produced at the studios of ABV2, Melbourne, and in a rare technical feat was relayed via microwave links for direct broadcast in Sydney.

American-born actress Evie Hayes, who hosted ABV2’s new year’s special a year before, was again called on for the new year festivities, scheduled to start at 11.00pm and just click over past midnight. 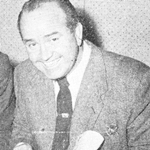 ABC presenter Kerby had pre-recorded her singing and comedy segments ahead of the live production as she was preparing for the birth of her and husband (and Sixty-One, Here We Come! producer) Oscar Whitbread‘s second child, due on New Year’s Day (The couple welcomed a daughter, born on 11 January)

The direct relay of Sixty-One, Here We Come! to Sydney came just weeks after ABC had also linked Sydney and Melbourne via microwave for telecast of the Davis Cup tennis. But ABC was not to have New Year’s Eve all to itself. Even though New Year’s Eve fell on a Saturday, GTV9 produced a special edition of variety show In Melbourne Tonight, with Graham Kennedy. The special served as the show’s sign off before going into recess for a month.

Melbourne’s other TV station, HSV7, took an alternative approach to the live-to-air festivities — screening Top Professional Golf at 10.00pm, then Wrestling From Chicago at 11.00pm before the locally-made special The Year In Retrospect at 11.30pm. Brian Naylor hosted New Year’s greetings from 11.56pm, featuring various station personalities, through to 12.10am.

Looking back at 2020, Television.AU celebrated its 20th anniversary.

Some of the TV milestones covered this year:

The pandemic took out the TV Week Logie Awards, but we continued to cover the award presentations of 50, 25 and 10 years ago.

The Royal Children’s Hospital Good Friday Appeal was also impacted by the pandemic, cancelling its telethon for the first time in over 60 years.

There were further cutbacks at Network Ten, impacting news production and Studio 10. Nine’s regional news took an unplanned break when the pandemic hit a peak, but was to return in a reduced capacity. More positively, Nine News restored its Darwin bulletin, albeit hosted from Brisbane.

We also featured Melbourne Cup flashbacks to 1960 and 1990. We said farewell to Nine’s heritage TV studios in Willoughby after 64 years, and paid tribute to the studios of WIN in Mount Gambier on its sale to a local business identity.

During the year we added 67 TV listings to the Classic TV Guides archive.

While 2020 was hardly the year that any of us had planned for, and even though it now appears there might still be challenges with the pandemic in 2021, let’s hope for a Happy New Year and better times ahead!