40. Bangkok Hilton (Ten, 1989)
Coming in at the tail-end of the era of big-budget Kennedy-Miller mini-series, Bangkok Hilton told the compelling story of the vulnerable Aussie tourist who inadvertently got caught up in drug smuggling and ended up in a Bangkok prison. Featuring Nicole Kidman in the lead role of Katrina Stanton, Bangkok Hilton was a ratings hit at the end of what had been a challenging year for the Ten network.

39. Beyond 2000 (Seven/Ten, 1985-1999)
What began as Towards 2000 on ABC was to get a boost when it was picked up by the Seven Network and re-modelled as the much bigger and glossier Beyond 2000. The show that brought science and technology to a mainstream commercial audience became an international success story, being sold to a number of overseas networks. Beyond 2000 eventually went over to Network Ten where it managed to hang on long enough for the show’s title to almost become redundant.

38. Behind The News (ABC, 1969-)
Bringing education and news together, Behind The News began back in 1969 and for generations of school kids (and some of their parents) gave context to news and current affairs in terms that they could understand without being condescending. Budget cuts saw Behind The News axed in 2004 but it was soon to be reinstated and is still going today. 37. The Paul Hogan Show (Seven/Nine, 1973-1984)
Working as a rigger on the Sydney Harbour Bridge, a young Paul Hogan appeared as a contestant on talent quest New Faces as a dare. His appearance led to a regular stint on the original A Current Affair and from there his comic career grew. The Paul Hogan Show (featuring Delvene Delaney, pictured with Hogan, among the supporting cast) began as a number of specials for the Seven Network before going into a comedy sketch series for Nine, with Hogan playing various caricatures and parodies. From there he became an international star through promoting Australian tourism to the American market and then playing the lead role in Crocodile Dundee, one of the most successful Australian films of all time.

36. Media Watch (ABC, 1989-2000, 2002-)
Since it began in 1989, Media Watch has been analysing and scrutinising journalism and the media in general — giving credit where it’s due but more significantly pointing out where the media oversteps the mark. Its reporting of the ‘cash for comment’ scandal in Sydney talkback radio scored it a number of awards for journalism.

35. The Curiosity Show (Nine, 1972-1990)
The Curiosity Show began as a series of segments on Here’s Humphrey before becoming a regular series of its own. It brought the basic concepts of science and the environment to a junior audience and won international acclaim, including the prestigious Prix Jeunesse in 1984. Original segments from the show, featuring hosts Dr Deane Hutton and Rob Morrison (pictured top), are now playing to a new audience via an official YouTube channel.

34. All Saints (Seven, 1998-2009)
Like GP, All Saints gave us a weekly dose of medical drama surrounded with all manner of personal and professional relationships and conflicts. Former A Country Practice and Fire star Georgie Parker was the lead in earlier seasons as Terri Sullivan, the nun who was now in charge of Ward 17 at All Saints Western General. But the show’s unsung hero was Von Ryan, played by Judith McGrath, the hardened nurse with a heart of gold, and the only character to last the show’s entire run of 12 seasons and 493 episodes. 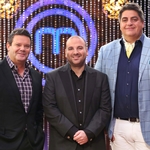 33. MasterChef Australia (Ten, 2009-)
When MasterChef was announced as the big ticket reality show to take over from Big Brother nobody was all that convinced. Who would watch a cooking show, six nights a week? What sort of drama or human emotion can be dragged out over a hot stove over thirteen weeks? The critics were soon silenced as MasterChef became one of the biggest TV hits since the turn of the century.

32. Australian Story (ABC, 1996-)
Since its debut in 1996, Australian Story has covered the often-unique stories of a diverse range of Australians from their own perspective. Some of the people to feature on Australian Story have been household names, others less so but with stories just as captivating. The program has been widely acclaimed with a number of Walkley and industry-voted Logie awards to its credit. 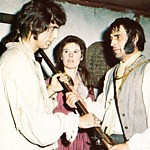 31. Against The Wind (Seven, 1978)
Although ABC had produced some small-scale historical mini-series in the early years, it took the huge success of the US mini-series Roots for commercial television to begin mining Australia’s history for big-budget mini-series. The first such production, Against The Wind, was a 13-hour saga which told the saga of Mary Mulvane (Mary Larkin), an Irish girl unjustly convicted and sent to Sydney to serve time. The series also featured rock star Jon English (pictured with Larkin and Gerard Kennedy) in his first major acting role, and for which he went on to win a TV Week Logie Award for Best New Talent. English also worked on the show’s soundtrack and co-composed and sung the series’ theme song, Six Ribbons.