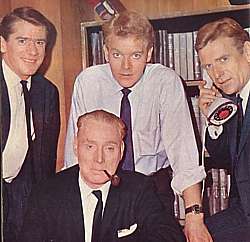 It’s hard to believe now, but Australian TV was almost ten years old before the first local police drama appeared on our screens.

Overseas series dominated Australian television in the early days, mostly because they were easy to buy and were considerably cheaper than producing a local product.

However, Melbourne-based production company Crawford Productions — headed by Hector Crawford and his sister Dorothy — who had been producing radio programs since 1945, had long campaigned to get a locally produced series on television.  The company had produced a court room drama Consider Your Verdict and other productions of drama and light entertainment, but had struggled to get a strong presence in the new medium. The company even went as far as to bid for Melbourne’s third commercial television licence in 1963, however they lost out to transport tycoon Reg Ansett.

Homicide was an immediate success for HSV7 and later its Seven Network partners interstate, achieving audience shares never seen before.  Viewers enjoyed seeing stories played out in their own familiar suburban backdrops and without an American or English accent.  The series even managed to sell overseas.

The success of Homicide was so great that the rival Nine Network soon approached Crawfords to produce a police drama for them — and in 1969 came Division 4 with Gerard Kennedy who would go on to win two TV Week Gold Logies for Most Popular Personality on Australian TV.

By 1970, Melbourne’s youngest commercial station ATV0 had launched their first attempt at drama, an in-house production called The Long Arm.  Sydney’s TCN9 also attempted a police drama The Link Men.  Neither series had a major impact on audiences and both lasted around three months.

The disappointment from The Long Arm prompted 0-10 to approach Crawfords to produce yet another police drama. Crawfords responded with Matlock Police, which unlike its predecessors would focus on drama in the fictional country town of Matlock.

The Crawfords trifecta of Homicide, Division 4 and Matlock Police continued to dominate in the early 1970s, but by 1975 the support of the networks was falling and all three series were axed within the space of around 12 months.  Conspiracy theorists had it that the networks wanted to see the downfall of Crawfords due to Hector’s push for more local content on Australian TV, and the rapid cancellation of its main breadwinners almost saw that happen with only the soap opera drama The Box keeping the company alive. 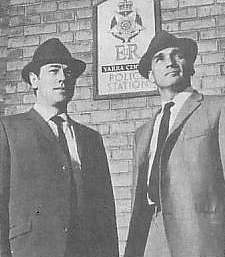 However, twelve months later all had seemed to be forgiven with Seven picking up a weekly series Solo One, a spin off from Matlock Police featuring the same motorcycle cop, Constable Gary Hogan (Paul Cronin), but the drama more aimed at a younger audience.  Solo One was not a huge hit, neither was another police series for Seven titled Bluey featuring comedian Lucky Grills in the unlikely role of unconventional cop Detective Sargeant Bluey Hills.  (Bluey later found a cult following when ABC’s The Late Show in 1992 re-dubbed scenes to form a series of comedy sketches titled Bargearse)

Crawfords had more luck later in 1977 by combining police drama with the now popular soap opera element with Cop Shop.  Screened twice weekly, Cop Shop took viewers not just to the scene of the crimes, but also followed the lives of the police men and women at Riverside Police Station.

Cop Shop continued until 1984 and in the meantime there were other less successful attempts at police dramas including Ten’s Bellamy and Special Squad and Nine’s soap-ish drama Waterloo Station.

In 1990, Seven resurrected the genre with the short lived Skirts, which gave yet another perspective on the force by focusing on a city-based Community Policing Squad, staffed predominantly by females — hence the title.  Skirts, which featured well known actresses Tracy Mann and Mary Coustas, struggled in the crucial Sunday 7.30pm timeslot.

Seven had more luck in 1994 with a new weekly series Blue Heelers from Southern Star Productions, with a cast headed by veteran actor John Wood and introducing an unknown Lisa McCune.  Blue Heelers followed in the tradition of 1970s hit Matlock Police by following events in a rural Victorian setting, this time in the fictional Mount Thomas.  The series was an immediate success and for years to come would be Seven’s flagship drama, and scoring a number of awards including 4 TV Week Gold Logies for McCune and 10 Gold Logie nominations (and one win) for Wood.

The success of Blue Heelers, and the growing popularity for police and crime shows from overseas, sparked a revival of the genre with more recent productions such as Phoenix and Wildside on ABC, Water Rats, Stingers and Young Lions on Nine and White Collar Blue and Rush on Ten which all experienced varying levels of success.

By 2006, the Seven Network announced it had axed Blue Heelers but allowed the series to run up to episode 510 –equalling the previous record set by Homicide for the longest running weekly series on Australian TV.

Replacing Blue Heelers in 2007 was a new Melbourne-based series City Homicide.  The thirteen-part first series was a big investment at a time when confidence in Australian TV drama was falling, but the program returned huge audience figures in its Monday night timeslot and helped the Seven Network win the ratings from arch rival Nine for the first time in decades.  A number of timeslot changes eventually saw the series lose favour with viewers and it quietly vanished in 2011. The second national broadcaster, SBS, also adopted the crime genre with East West 101, premiering late-2007. From the producers of ABC’s Wildside almost a decade earlier, East West 101 took a new perspective on crime drama by going into Sydney’s west — an area with a strong multi-racial mix — and tackling the issue of race relations both inside and outside the police force.  The network again tackled a unique approach to the genre with the 2009 series Carla Cametti PD, based on the story of an Italian-Australian police detective who comes from a family of gangsters.

The popularity of the Nine Network’s Underbelly franchise has seen crime shows shift the emphasis from the police that solve the crimes to the perpetrators — with the Ten Network since responding with its own Bikie Wars: Brothers In Arms in 2012.

Permanent link to this article: https://televisionau.com/feature-articles/cop-shows