It is 40 years since the last TV Times rolled off the presses.

The final edition, with Cop Shop stars Peter Adams and Joanna Lockwood on the cover, featured a double-page article on the two actors leaving the series after nearly three years and their characters, ‘JJ’ and Valerie, getting engaged, leading to their exit from the series.

The front cover tease of ‘the documentary too good for you to see’ referred to Front Line, the story of ABC cameraman Neil Davis, who filmed the Vietnam War from 1963 to 1975. The documentary had won awards at the Sydney and Melbourne film festivals and at the American Film Festival in New York. It had also been broadcast in the United Kingdom, United States, France and Scandinavia, but was not picked up by any networks in Australia. Networks here cited that the asking price was too expensive and that “55 minutes of the Vietnam war are too hard to schedule in prime time”. TV Times, which was born in the late 1950s as TV News-Times out of an early merger of two titles — TV News and TV Times — had 20 years later become swallowed up by a merger with TV Week.

TV Times had long been published in a partnership between Australian Consolidated Press (ACP) and the ABC.

By May 1980, the ABC had assessed that falling circulation and an increase in competition had no longer rendered TV Times financially sustainable. ABC then sold its share of the magazine to ACP. The last issue to be published under the ABC/ACP partnership was dated 28 June 1980.

ACP then went and took TV Times to Southdown Press, publisher of TV Week, and entered into an agreement for Southdown Press to publish TV Week as an amalgamation of both titles on behalf of both owners.

At the same time Southdown Press, then owned by News Limited, had also taken control of the Australian version of TV Guide, which had commenced national publication a year earlier as an expansion of the long-running South Australian magazine of the same name.

The result was all three national magazines — TV Week, TV Times and TV Guide — being merged into a revamped TV Week, with the TV Week masthead incorporating the other two titles in its masthead: 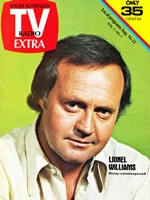 While the amalgamation of three titles into one for TV Week was done on a national scale, the exit of TV Guide from the national market prompted South Australia publisher Messenger Press to launch a new local title — TV Radio Extra — incorporating a similar format and features of the former TV Guide for the local market. Many of the staff that produced the South Australian edition of TV Guide went on to TV Radio Extra.

Permanent link to this article: https://televisionau.com/2020/08/the-last-tv-times.html