The decade started in recession and with two networks in receivership, and a third being sold back to its former owner for a fraction of what it had been bought for. Cost cutting and tight budgets became increasingly common. Despite this, regional television was expanding at a rapid rate to give country viewers the same choices as their city counterparts. Then came the countdown to the new millennium. 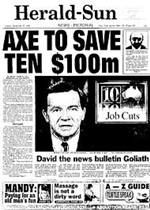