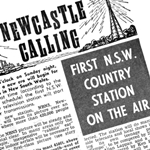 The official opening of NBN3, Newcastle, on 4 March 1962, marked the beginning of television in regional New South Wales.

Construction of the station’s premises in Mosbri Crescent, Newcastle, had been 18 months in the planning – culminating in a two-studio complex capable of producing large-scale “live” production as well as news bulletins, women’s and children’s programs, weather reports and commercials. Programs were then beamed from Mosbri Crescent to a 450-foot mast atop Mount Sugarloaf which would then broadcast the NBN3 signal to an area of over 420,000 people, stretching from Gosford and Sydney’s northern suburbs in the south, almost as far north as Taree and out west to Scone and Muswellbrook. But despite NBN3 being the region’s first television station, many locals were more than familiar with television. Much of NBN3’s coverage area also received fortuitous coverage of the Sydney channels – leading to a proliferation of high-mast antennas sprouting up on top of many homes to get a clearer picture of the Sydney-based signals. NBN3 initially promised a schedule of around 56 hours of programming a week, starting transmission each day from around 2.30pm.

Next station to commence operation was CBN8, based in Orange and serving the Central Tablelands region of central western NSW, launching on Saturday, 17 March 1962.

CBN8’s signal was broadcast from a transmission tower atop Mount Canobolas which, at approximately 1400 metres above sea level, made it the highest transmission tower in Australia. This gave the station’s signal a wide coverage area, with reception of test transmissions recorded as far away as Canberra, the Blue Mountains and Sydney’s far western suburbs.

The new channel, owned in partnership with local radio station 2GZ, promised an initial schedule of around 35 hours of programming each week. Most programming was imported from the US but the station also established local programming, including a news service with bulletins each weeknight at 6.45pm and 10.00pm and at 7.00pm on weekends. The newscasts combined local news stories with national and international stories sourced via Australian United Press.

WIN4, serving Wollongong, the Illawarra region and the south coast of NSW, made its official debut on Sunday, 18 March 1962. The station’s first program on opening night was a news bulletin presented by Don Dive and which included a greeting to viewers by general manager Robert Lord.

WIN4’s regular weekday schedule commenced at 5.15pm with the children’s show The Channel 4 Club, hosted by Ralph Fairbrother, followed by various imported serials such as The Lone Ranger, Robin Hood and The Invisible Man before Don Dive presented a 15-minute news at 6.45pm.

The last commercial station in the Stage Three rollout in regional New South Wales was RTN8, Lismore, commencing transmission on 12 May 1962, from studios at Goonellabah and transmitter at Mount Nardi. Shareholders in RTN included radio stations 2MW (Murwillumbah) and 2LM (Lismore) and local newspaper publishers.

Permanent link to this article: https://televisionau.com/2022/03/tv-at-60-tv-comes-to-regional-nsw.html