After Brisbane‘s official launch of its first television stations, Adelaide became the fourth city in Australia to receive television.

Like with other cities, Adelaide was to be served by national broadcaster ABC and two commercial channels.

Television Broadcasters Ltd’s major shareholder was Advertiser Newspapers Ltd, a member of the Herald and Weekly Times group and whose media assets included The Advertiser, radio station 5AD in Adelaide and regional radio stations 5MU, 5PI and 5SE. Also investing in the new company was fellow Adelaide radio station 5KA and Associated Newspapers of London. The new television station was to become ADS7. The race was then on to get to air — with NWS determined to be first of the three channels to commence official operation. NWS9 was building its new studio on Tynte Street, North Adelaide, across the road from 5DN. Meanwhile, ADS7 was setting up studios on Strangways Terrace, also in North Adelaide, adjacent to a historic two-storey mansion (pictured above), built in 1913, which became the station’s administration block. ABC was building its new studios for ABS2 in the suburb of Collinswood. In choosing locations to build their stations, it was crucial that they had line-of-sight to the top of Mount Lofty to allow them to beam their signal via microwave to the TV transmitters being built on top of the mountain, to then be broadcast to Adelaide’s population of around 700,000 — representing about 77 per cent of South Australia’s population. The local sale of TV sets commenced from Monday 4 May 1959, with ADS7 conducting test transmissions from two weeks prior, and NWS9 starting its testing on the day. The transmissions mostly consisted of test patterns and short films, not necessarily intended for mass audiences but there were crowds all around TV retailers in the city and suburbs in order to get their first glimpse at television. Retailers like Myer, Sven Kallin, Rundle’s, Ernsmiths and John Martin’s were well stocked for the rush in people buying TV sets. More than 15,000 sets were reported to ready for eager buyers across Adelaide and nearer country areas. One retailer attracted crowds by having a TV camera onsite to capture people’s reactions and have the pictures displayed on a closed-circuit television, allowing budding viewers to see themselves on TV. It was a feature popular with children, especially those pulling faces on camera!

Another store had a mini-studio set up on its second floor so that interviews could be conducted with people selected from the crowd outside and the interviews displayed for those watching TVs through store windows on the ground floor.

Some store windows with TVs on display still attracted crowds of keen viewers even when there was no TV pictures being transmitted and the screens were just flickering or showing static.

NWS9’s ambitions of being the first station to open were almost dashed when a fire tore through part of its newly-constructed studio complex one night in June. The fire destroyed a small presentation studio, props area and carpenter’s store and part of the building’s roof structure was warped from the heat. The fire was estimated to have caused £10,000 in damage. No electrical equipment was reported damaged, but a significant amount of cabling was damaged and had to be re-installed as the affected areas were re-built.

The small studio was intended to host NWS9’s first live production to be conducted during its test transmission phase. Nine’s search for a TV hostess was to culminate in the finalists being announced in a special program, Clarkson’s TV Hostess Quest. With the intended studio out of action, Nine had to find another means to present the program. It was eventually found that the only room fit to broadcast the show was the women’s dressing room. The small room had to accommodate host Kevin Crease, the four finalists, a cameraman and a bulky studio camera, with a set backdrop hurriedly built at the last minute. The winner of the quest was housewife Joan Peake. NWS9 made its official debut on Saturday 5 September 1959. Programming started at 2.30pm with cartoons, short films and a Western starring Roy Rogers. There was no gala opening ceremony or large scale special to welcome the channel, apart from a half-hour documentary tracing the building of the new station and a short speech to viewers by South Australian Premier Sir Thomas Playford. 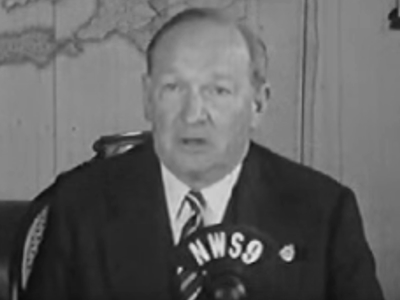 The rest of the night’s line-up consisted of overseas programs — The Lilli Palmer Show, State Trooper, This Is Fred Astaire, The Webb and the film Wild Blue Yonder — before a news update and the epilogue closed the night’s transmission at 11.00pm.

Nine did have a more lavish affair when it launched its new variety show Adelaide Tonight, with a proud Murdoch in the studio audience along with invited government dignitaries and station sponsors. The show made its debut at 9.30pm on Saturday 17 October with host Lionel Williams and fellow NWS personalities Kevin Crease and Leona Gay. Performers in the first show included American comedian Oscar Cartier, local singer Paula Kitson, comedian Hal Turner and a 24-year-old Malaysian student by the name of Kamahl making his television debut. Music was provided by Nine’s own orchestra, directed by Walter Lund. A week after Adelaide Tonight‘s debut, on 24 October the city’s second channel, ADS7, was officially opened. Seven’s opening night commenced with an official opening ceremony by South Australian Governor Sir Robert George at 7.30pm, followed by a short film, This Is TV, and preview scenes of upcoming ADS7 programs. The following night’s lineup included the launch of new locally-produced programs Stairway To The Stars, Meet The Press, quiz show Noughts And Crosses and religious discussion I Challenge The Minister. Filmed programs on the second night included the debut of Disneyland and the Fred Astaire movie Top Hat.

It was March 1960 before ABC launched its Adelaide TV station ABS2 from its Collinswood studios, although it was presenting test programs from mid-February. Opening night on Friday 11 March started at 7.00pm with a 20-minute introduction featuring speeches from Postmaster-General Charles Davidson, South Australian Premier Sir Thomas Playford and Opposition Leader Michael O’Halloran. This was followed by the first ABC news bulletin then US sitcom The Phil Silvers Show, a documentary on Soviet leader Nikita Khrushchev, Western series Tales Of Wells Fargo, British drama Boyd QC, a local documentary on Adelaide and a live music program before the documentary Growing Up With Guba. It was a program line-up that had much in common with Brisbane’s ABC station ABQ2 when it debuted four months earlier.