After 25 years at the Seven Network, presenter and reporter Melissa Doyle announced her departure from the network on Friday.

“I have some personal news to share…after twenty-five years I am leaving the Seven Network.

For half of my life I have called Channel Seven home and in that time I’ve had the privilege to share stories that mattered, meet incredible people and report on some of the greatest moments in history.

I am incredibly proud of the work I have done and so grateful to have worked with some of the very best in my industry.

And I am so appreciative of the trust and warmth our viewers have shown me. They have been part of my family – through Today Tonight, Sunrise, Seven News, Sunday Night and the multitude of programs I’ve been part of at Seven.

I want to thank the consummate professionals I have worked with along the way, and in particular our Chairman Kerry Stokes for his constant support.

Whilst I am sad to be leaving, I do so with a great deal of pride, satisfaction and gratitude.

Every ending is a beginning and I’m excited for what comes next.”

Doyle joined Seven’s Canberra bureau in 1995 after stints at the Canberra news rooms of WIN and Prime regional networks. 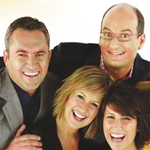 By 1997, she hosted the an early version of Sunrise — back then just an early morning news hour. A few years later, Sunrise developed into a breakfast television format, with Doyle accompanied by Chris Reason and then David Koch. The chemistry of the show’s presenting team, which later expanded to include Natalie Barr, Mark Beretta, Simon Reeve, Grant Denyer and Monique Wright, revitalised breakfast television and was soon to beat Nine‘s long-running rival, Today.

During her time on Sunrise, Doyle covered such significant events as the Beaconsfield mine disaster, the Royal Wedding of Prince William and Catherine Middleton, Olympic Games in Sydney, Athens, Beijing and London, the Queen’s Diamond Jubilee, the Queensland floods, Victoria’s Black Saturday bushfires, multiple federal and state elections, the Inauguration of Barack Obama and the election of Pope Francis.

It was a shock to Sunrise viewers when Doyle announced she was stepping down from the show, and focusing on other projects for Seven. She presented national bulletins for Seven and became a host and reporter for Sunday Night.

Over her years at the network, she also hosted Eleven AM, Where Are They Now?, TV Turns 50, The Zoo, Australia Unites: Reach Out To Asia and Today Tonight.

For a quarter of a century, @melissadoyle has called Channel 7 home. Today, some sad news, with the announcement that Mel will be leaving us to take up new opportunities elsewhere. Here’s a look back at her wonderful career. https://t.co/5zYfOfohG3 @michaelusher #7NEWS pic.twitter.com/mKaNcl1VQW

It is now yet known what future ventures Doyle has in mind but she continues to present the weekend breakfast shift on Smooth FM. Since joining in 2013, she has won two Australian Commercial Radio Awards (ACRA) for her work on Smooth.

Permanent link to this article: https://televisionau.com/2020/08/seven-farewells-melissa-doyle.html