The opening night of ABC‘s Melbourne station ABV2 went ahead without anywhere near the problems encountered by its Sydney sister two weeks earlier.

The station was officially opened by Minister for Labour and National Service Harold Holt shortly after 7.00pm on Monday, 19 November 1956. 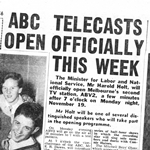 The first program was American variety series The Frankie Laine Show. This was followed by British police series Fabian Of Scotland Yard.

The film This Is The ABC, same as the one shown on ABN2’s opening night, took Melbourne viewers through the various operations of the national broadcaster, largely focusing on radio.

The final program for the night was the first episode of the BBC documentary series War In The Air. With construction of ABV2’s Ripponlea premises still in progress in 1956, the station had to make use of temporary accommodation across various sites in Melbourne, including a makeshift studio at Broadcast House, the ABC’s radio studios in the CBD.

Just three days after its official opening, ABV2 was off to the Melbourne Olympic Games, providing as much as eight hours a day of live coverage via a single outside broadcast van over the course of competition. Filmed coverage was then flown up to Sydney for broadcast on ABN2.

Some programs were able to be made from the still incomplete Ripponlea studios, including drama plays produced early in 1957. 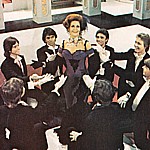 With the redevelopment and expansion of ABC’s radio and television complex in inner city Southbank, the Ripponlea studios will soon be decommissioned — ending 60 years of production from that site.

Permanent link to this article: https://televisionau.com/2016/11/tv-at-60-abc-begins-in-melbourne.html