Number 96, the hit series of the 1970s that changed the course of television, turns 50 years old today.

In 1971, the six-year-old 0-10 Network was in a perilous state. Its member stations were struggling to break the dominance of the older Nine and Seven networks and were either compounding financial losses year after year, or at best only making modest dividends.

In a final act of desperation, producers Bill Harmon and Don Cash were commissioned to propose a serial-based drama. The pair summonsed writer David Sale (The Mavis Bramston Show, The Group) to form the basis of an adults-only drama to run a couple of nights a week. Sale’s pitch based around a fictional Sydney apartment block — titled, even then, Number 96 — was an instant hit with Sydney’s TEN10, which then ordered the show to run five nights a week. The pilot was produced in October 1971 and went into regular production in January 1972. On the day of its debut in Sydney on 13 March 1972, newspaper ads claimed: “Tonight at 8.30, television loses its virginity”. The following day, ATV0 was a little less salacious in promoting the Melbourne debut, but the emphasis was on the show being “Strictly for Adults”. A week later, Brisbane’s TVQ0‘s newspaper ad claimed Number 96 as “a searing exposure of Australian life so raw, it almost bleeds!”. With its assortment of storylines tackling sex, adultery, racism, homosexuality, cancer, drugs and rape, combined with casual glimpses of nudity and loads of comedy, Number 96 had an immediate impact on the 0-10 Network’s ratings and financial position. Within two years, Sydney’s TEN10’s full-year profit had skyrocketed from less than $200,000 to $1.55 million. Number 96 went on to top the national ratings in 1973 and 1974 and for the first time 0-10 was seen as a formidable rival to Nine and Seven. The show’s characters became suburban heroes and the cast would be met with massive crowds when they made the annual train trip to Melbourne to attend the TV Week Logie Awards. Pat McDonald, who played “concerge” Dorrie Evans, became the first actress to win a TV Week Gold Logie for Most Popular Personality On Australian Television. Abigail, who played Bev Houghton, was the show’s drawcard as its major sex symbol, though the character, despite her outward sexual confidence, was later revealed to be a virgin. Joe Hasham‘s portrayal of homosexual Don Finlayson was seen as groundbreaking for a series anywhere in the world. Finlayson’s sexuality would have inevitably seen the character relegated to ‘bit part’ status or a crude homophobic caricature in any other series, but in 96 he was a leading character portrayed with depth and sensitivity and without any sense of derision or gossip from the block’s fellow occupants. 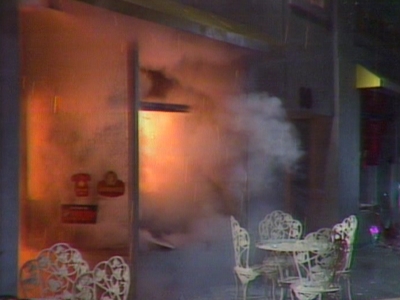 The storylines became larger than life, including the block’s tenants being terrified of the mysterious ‘Knicker Snipper’ and ‘Pantyhose Strangler‘, and the bomb blast that wiped out four characters in an attempt to revive its falling ratings. But the storylines weren’t always salacious. Lucy Sutcliffe’s (Elisabeth Kirkby) storylines around her eye surgery and a cancer scare also struck a chord with viewers. 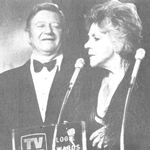 The series ended up winning four TV Week Logie Awards for Best Drama. As well as McDonald’s Gold Logie in 1974, she also won Best Actress in 1973, 1974 and 1976. Bunney Brooke, who played Flo Patterson, won the Logie for Best Actress in 1975 (pictured, with Logies guest John Wayne).

Despite its phenomenal success in Australia, including a movie spin-off in 1974, Number 96 failed to make a significant impact overseas. It was deemed too risque for many overseas markets, although it did have minor runs in Italy and Canada. An attempt by NBC to make an American version in 1980 failed dismally. 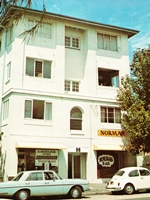 There has been so much more written about Number 96 — including the Number 96 Homepage, David Sale’s book Number 96, Mavis Bramston And Me, Andrew Mercado’s book Super Aussie Soaps, Nigel Giles’ book Number 96: Australian TV’s Most Notorius Address, TV Tonight‘s interview with David Sale, plus further blog posts on this site including Number 96… in their own words, 96 mix-up confuses viewers!, From 96 to Neighbours, TV’s long walk to marriage equality, TV Week’s front covers of ‘96’ and feature article Number 96.