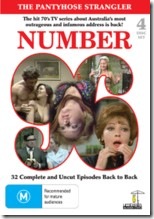 Umbrella Entertainment’s second Number 96 DVD release, centred around the Pantyhose Stranger storyline, is set for September.  It is available to pre-order at online retailers such as Sanity, JB and Ezydvd as well as from Umbrella directly.

Number 96: The Pantyhose Strangler features 32 episodes from the hit series, spanning a period from late 1974 to early 1975, when Sydney’s most famous apartment block was under threat from the mysterious murderer.  Everyone in the block was a potential victim, or suspect.  The identity of the notorious murderer is finally discovered by Marilyn MacDonald (Frances Hargreaves) late one night in the local laundrette: “Oh my God – it’s you!”

Although the Pantyhose Strangler struck at a time when Number 96 was perhaps beyond the ratings peak of its earlier days, it was not to be the last mysterious murderer to enter the building.  Several months later, the apartment block was under attack yet again from the bomb blast which wiped out four of the show’s regular characters.

Permanent link to this article: https://televisionau.com/2008/07/pantyhose-strangler-strikes-in-september.html