In 1970 he played the part of Captain Mike Roke in the children’s science fiction series Phoenix Five, but his most famous role came in 1974 when he joined Number 96 as officious town clerk Reginald “Daddy” MacDonald. 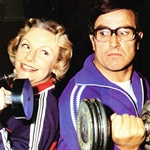 The uptight Reginald and his scatterbrained wife Edie “Mummy” MacDonald, played by Wendy Blacklock, went on to become a hit with viewers and stayed in the series through to its final episode in 1977. There were plans to produce a spin-off series, Mummy And Me, with Reg taking up a position at an advertising agency, but it was not picked up.

After the demise of Number 96, Dorsey and Blacklock continued to perform “Daddy” and “Mummy” as a touring club act.

Dorsey then went on to an ongoing role in soapie The Young Doctors before taking on the part of amusement parlour owner Vic Marshall in the short-lived series Arcade.

In 2010, he reunited with other former Number 96 stars at the apartment building that became the famous fictional address for the 90th birthday of colleague Johnny Lockwood.

Dorsey’s most recent credited role was as “Pop” in Lockie Leonard in 2007.