Carol Raye, former television producer and performer, has died at the age of 99.

British-born Raye had a successful career in British film and television in the 1940s and ’50s. In the early 1960s, her husband’s work took the family to Kenya and Raye ended up working as a producer for the Kenya Broadcasting Corporation. 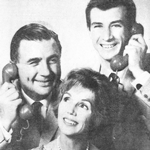 The family then came to Australia in 1964 and Raye joined ATN7 in Sydney as a producer and special assistant to General Manager Jim Oswin. She devised the original format of the station’s new sketch comedy series The Mavis Bramston Show, loosely inspired on the British show That Was The Week That Was. Although she appeared in the show’s pilot, she was not intended to remain in an on-air role. But when casting for a suitable female to complete the leading ensemble with Gordon Chater and Barry Creyton proved difficult, Raye ended up filling the role.

She stayed with The Mavis Bramston Show for two years, and collected a TV Week Logie Award in 1966 for Best Female Personality, before heading to rival channel TEN10 to lead its new comedy show 66 And All That. She ended up quitting the show, which also starred Barry Crocker, Mike Walsh and Peter Whitford, after only three months, citing a decision by the then new channel to only commit to renewing the show in six-week spurts. “I have a family and it meant I just couldn’t plan anything ahead,” she told TV Times at the time. “It’s like working in a vacuum. So after a great deal of thought I told the station I wouldn’t be available for any other series of six.” She went on to appear in an episode of Australian Playhouse and made a guest appearance in Riptide before joining the cast of Number 96 in 1973, playing the recurring character of Baroness Amanda von Pappenberg, the exuberant aunt of Don Finlayson (Joe Hasham). Raye later retired the character but went on to work as the series’ casting director. 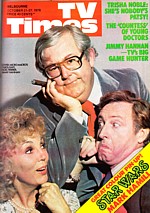 She later went on to become a regular panelist on the game show Blankety Blanks and hosted an ABC music show, Capriccio. She also appeared in Up The Convicts, Micro Macro (pictured with Noel Ferrier and Jimmy Hannan), The Young Doctors, The Mike Walsh Show, Loss Of Innocence, Chopper Squad, Relatives, Man Of Letters, Mission Top Secret, Seachange and in television commercials.

Earlier this month she was appointed a Member of the Order of Australia (AM) in the 2022 Queen’s Birthday Honours,  “for service to the performing arts as an actress and producer”.

After that beautiful #Logies In Memorian, a sad addition
Carol Raye, star of The Mavis Brampton Show and Blankety Blanks, and Aussie TV’s first female executive, died late last night
She was as delightful and luminous in real life
as she was here in 1974 on Number 96 pic.twitter.com/2wrdAR9G1i