The presentation was held at Melbourne’s Southern Cross Hotel on Monday, 21 March 1966, though there appears to have been no televised or press coverage of the event. Even TV Week only devoted three black-and-white pages to listing the award winners and instead of the Gold Logie winner it put Best Teenage Personality winner Normie Rowe on the cover.

Chater’s co-star Carol Raye won the Logie for Best Female Personality. It seems since Lorrae Desmond‘s Gold Logie win in 1962 that females were not deemed worthy of the Gold award, with the highest accolade for a female personality being silver.

The Mavis Bramston Show not surprisingly won the Logie for Best Live Show. The win came after a huge year for the show which had expanded to a national audience. But by the time of the Logie wins, both Chater and Raye were no longer associated with the program. Chater had moved on to a proposed sitcom, Fiddlers Three, which was not to come to fruition. He had more success in the ensemble cast of sitcom My Name’s McGooley, What’s Yours? for the Seven Network, while Raye had made the switch to Sydney station TEN10 for her new show, ’66 And All That. An ABC special, Birth, won the award for Best Documentary. The 50-minute program, produced by Jim White of Melbourne’s ABV2, documented the process of the birth of his daughter, Hilary. The idea for the documentary had come from his wife. The film had already been commended with a special award at the Australian Film Awards and had attracted interest from TV broadcasters in other countries. 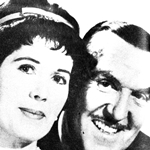 And as the quiz show Pick A Box entered its 10th year on TV, the show’s co-host, Dolly Dyer, was given a rather unique award, “For Her Cheerful Devotion To Bob And Their Show”. The husband and wife team (pictured) had worked together since Pick A Box began as a radio program in the late 1940s.

In the state-based categories, in Victoria it was a clean sweep by In Melbourne Tonight, winning Victoria’s most popular program, with host Graham Kennedy and IMT regular Mary Hardy taking out the most popular personality awards.

Don Lane and his TCN9 program Tonight With Don Lane were winners in New South Wales along with ABC presenter Diana Ward. Brisbane-based variety program Theatre Royal won for most popular program from Queensland for the fifth year running.

In South Australia it was another win for Adelaide Tonight and for host Ernie Sigley, voted the state’s most popular male personality for the third year in a row.

Afternoon variety show Anything Goes, from Hobart’s TVT6, took out all three awards for Tasmania — with the program and its two hosts, John Crook and Caroline Schmit, each claiming a Logie. 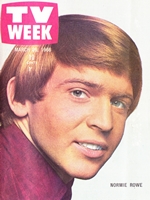 For Her Cheerful Devotion To Bob And Her Show: Dolly Dyer