Last week the Seven Network presented Operation: Live, a televised account of a Cesarean section birth — claimed by host Melissa Doyle as a first for Australian television, although the “live” component was taking some artistic licence as the actual procedure took place well before airtime.

Seven’s claim of “first” is not strictly true as there was an ABC documentary made back in 1965 that documented the birth of the daughter of an ABC producer. 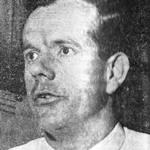 Jim White (pictured) had been working for ABC for 10 years, and six of those producing documentaries and outside broadcasts for television. He had already put together a program for ABC radio about the birth of his eldest daughter. It was his wife, Mahdi, that suggested recording the birth of their second child for television.

“I thought it was too much of an important subject to allow the documentary to only go halfway,” she told TV Week at the time. “I knew that my husband had full control over the editing and presentation of the film, so that the result would be in good taste and offend no one.” In preparation, Jim White spent three weeks at a Melbourne hospital watching babies being born. His film crew of six had been shown medical films dealing with childbirth and were on standby 24 hours a day as Mahdi was approaching delivery.

The film covered the full process from when contractions started and followed Mrs White’s journey to the hospital as she was in the first stages of labour. The film crew then followed her as she was taken to the delivery room in a Melbourne hospital and the whole of the actual birth of Hilary White is filmed. The film was made with the co-operation of the Department of Obstetrics at Monash University and the Australian Medical Association. The program included discussions by practising pediatricians from Sydney and Melbourne.

“Filming the birth of my daughter was a wonderful, moving experience,” Jim told TV Times after the event. “It can cause no embarrassment to anyone. The film crew knew exactly what I wanted, and camera angles were well planned before we started. Everything went so smoothly that I did not find it necessary to cut anything from the original film.” White also presented commentary on the film.

The 37-minute film, simply titled Birth, went to air on ABC in Victoria, New South Wales and the ACT in June 1965. It was scheduled to air on a Wednesday night after 10.00pm, with ABC suggesting that “children under 12 or adolescents who have not had childbirth explained to them should not see the program”. The program was then planned for transmission in other states.

Before it had even gone to air, Birth had attracted interest by TV stations overseas and had received a special mention for story treatment at the 1965 Australian Film Industry Awards.

The below video is a brief excerpt from the program, featured in the 1996 special 40 Years In The Making: ABC TV Melbourne: Permanent link to this article: https://televisionau.com/2019/02/abc-documentary-birth.html