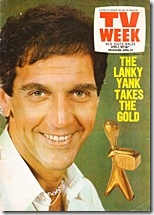 American-born entertainer and one of the greats of Australian TV variety, Don Lane has died after a battle with Alzheimer’s disease. He was 75.

Born Morton Donald Isaacson in 1933, Lane grew up in the Bronx district of New York. A nightclub performer in the US, he first came to Australia in the mid-1960s when he was invited to host a variety show, The Tonight Show, at TCN9. 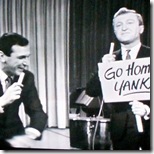 It was during The Tonight Show that Lane and his In Melbourne Tonight counterpart Graham Kennedy appeared together in a split-screen broadcast (pictured) from their respective cities in a technical link-up only made possible by the linking of the two cities by coaxial cable.

In 1968 Lane made news when he was charged with possessing marijuana and spent four days on remand in Sydney’s Long Bay jail before being acquitted.

In the early-‘70s, Lane made regular trips between Australia and the US, but was based in the US when he was invited to appear at the Nine Network’s Darwin appeal after Cyclone Tracy in 1974. That appearance led to an invitation by ATN7 Sydney to host a new tonight show but Lane declined and instead took up an offer to host a Monday night show for GTV9 Melbourne in the wake of Graham Kennedy’s hasty departure from the channel after his suspect ‘crow call’ incident saw him banned from appearing on live television.

The Don Lane Show began on 12 May 1975 and was an instant ratings hit. Airing twice a week, it was the show that was visited by some of the biggest names in showbusiness and also pioneered the live satellite interviews, a rarity in the ‘70s. Highlights of the show were also packaged for syndication across the United States. 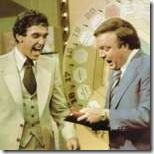 The Don Lane Show also formed one of Australian TV’s most famous double acts when it teamed up Bert Newton as Lane’s comic sidekick. Lane was the straight man to Newton’s comic performances and impersonations, and the pair also worked together on Melbourne radio station 3UZ.

The Don Lane Show won a swag of TV Week Logie awards including Lane winning the Gold Logie for most popular male personality on television in 1977. It was in his acceptance speech for the Gold Logie that he famously paid tribute to Newton, clutching the Logie and promising “here you are, pal! – six months at my place, six months at yours.”

Newton today said that Lane “reinvented variety” and paid tribute to his colleague and friend:

“Variety took on a new meaning. There were satellite interviews, world famous guests were coming onto the show. He shared the set with some of the biggest names in the business.”

“I laughed at the time and I laugh now at the memory on this very sad day.”

After The Don Lane Show wound up in November 1983, Lane headed back to the US but was soon back in Australia when he joined Network Ten in 1987, hosting a game show, You’ve Got To Be Joking, and the TV Week Logie Awards. He followed these in 1988 with Late Night Australia, a five-night-a-week variety show that ended up against Graham Kennedy’s News Show on Nine.

In the ‘90s, Lane gained a following as a presenter of ABC’s late night NFL coverage and appeared as a guest on The Late Show. 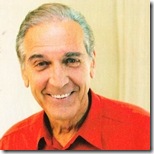 In 2003 he was inducted into the TV Week Logie Awards’ Hall of Fame.

Lane was diagnosed with Alzheimer’s disease in 2005.

“Today Australia lost one of its finest all-round entertainers.

Don Lane was a stalwart of the industry and a great mate to so many of us here at Nine.

While Don may have passed, the memories and the laughs he provided will remain with us for many years to come.

Our deepest condolences are conveyed to Jayne Ambrose, PJ and Don’s extended family.”

A funeral for Don Lane will be held today (Friday) with a public memorial to be announced.

Permanent link to this article: https://televisionau.com/2009/10/don-lane.html