The Seven Network‘s Steve Vizard was awarded the Gold Logie for Most Popular Personality On Australian TV at the 33rd annual TV Week Logie Awards.

The presentation, held at Melbourne’s World Congress Centre, was hosted by Somers and broadcast on the Nine Network.

The show began with Somers making his entrance to the stage from high up in the ceiling of the World Congress Centre via a flying fox. Somers, hosting the Logies for the second time (the first was in 1988) says he was “very happy” with his job as host. “It was a great team effort all around. It was a real buzz for me. I felt comfortable and relaxed. I really enjoyed it.” As for the high-rise entrance: “It was pretty spectacular, wasn’t it? In rehearsals, I was that harness for 45 minutes and it was so tight around the shoulders, I started to get dizzy. And the other part of the harness… well let’s just say that was a very uplifting experience!” The opening of the Logies included a performance by Debbie Byrne and the Electric Legs dancers (pictured). Also performing on the night was Mark Williams, best known for his hit song Show No Mercy.

Overseas guests attending the Logies included actress Angie Dickinson and Twin Peaks stars Peggy Lipton and Michael Ontkean. For Lipton, it was a long-awaited arrival to the Logies. She had been invited 20 years earlier as a cast member of the then hit series The Mod Squad, but had the withdraw from attending due to illness. “I finally made it — better late than never,” she told TV Week. 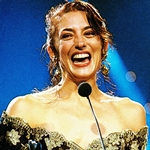 Home And Away star Craig McLachlan won the Silver Logie for Most Popular Actor for the third year in a row — and 25 years later is nominated for the same award. A Country Practice star Georgie Parker (pictured) won the Silver Logie for Most Popular Actress, only a year after winning the Logie for Most Popular New Talent. “The Silver is great for A Country Practice,” she said. “It means people are really interested and watching.” It was a double celebration for A Country Practice that night, as series creator and executive producer James Davern had been inducted into the TV Week Logie Awards Hall Of Fame. The award was in recognition of a career that had begun at the ABC in the early 1960s and included working on dramas Bellbird, Rush and Patrol Boat. His concept for a rural drama set around a local hospital was knocked back by Network Ten only to be picked up by Seven in 1981. At the time of this award, A Country Practice had been running for almost ten years and had sold well overseas. (Ironically, Network Ten ended up picking up the series in 1993 after Seven had axed it, but it was not to be a success for Ten) 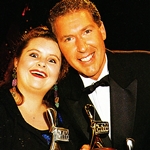 Fast Forward star Magda Szubanski (pictured with Vizard) won the Logie for Most Popular Light Entertainment/Comedy Female Personality, but was more concerned whether or not she’d make it through the night as she’d been battling a virus for the past month. “I didn’t think I would make it through the show, but I’m okay,” she later told TV Week. Szubanski had also appeared as a guest presenter on the night as her alter ego Pixie Anne Wheatley. “Pixie seems to be a favourite, but I hope this award recognises all my work, not just one character.” 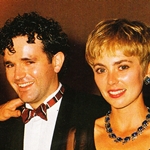 Veteran actor Michael Craig was awarded Most Outstanding Actor for his work on the ABC series GP, but was unable to attend as only a few days earlier had gone into hospital suffering from osteomylitis. The illness had taken Craig out of production for GP for several weeks and his Logie was accepted by colleague and fellow nominee John McTernan. 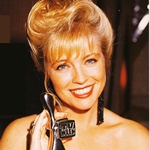 Rebecca Gibney (pictured), who played the part of Guinea in the ABC mini-series Come In Spinner, won the Logie for Most Outstanding Actress. “It was one of those roles that every actress in the country was after,” Gibney told TV Week. “I didn’t think I would have a chance.” Gibney had also won an AFI Award for the same role. Come In Spinner, the story of three women working in the Marie Antoinette Beauty Salon in Sydney during World War II, also took out the Logie for Most Outstanding Telemovie Or Mini-Series.

Four Corners won the Logie for Most Outstanding Achievement In Public Affairs for Paul Barry‘s report on Independent Resources Ltd, which lost $200 million of shareholders’ funds and, at the time of the Four Corners report, was “still in business”. The report Other People’s Money, produced by Debbie Whitmont, had Barry travelling across Australia, to the Manila Stock Exchange, a Philippines gold mine, the US oil fields, the City of London and London’s stockbroker belt.

Ray Martin won the Logie for Most Outstanding Single Documentary Or Documentary Series for The Chelmsford Scream. Martin, whose original 60 Minutes report in 1981 on the controversial Chelmsford hospital in Sydney exposed some of the horrific treatment subjected to patients, had returned to 60 Minutes to lead the team covering the Royal Commission into the hospital. The resulting 60 Minutes documentary was named after the screams of patients who received a bolt of electricity to the head after heavy doses or barbiturates.

ABC journalist John Lombard won the Logie Award for Most Outstanding Achievement In News for his reports from the Soviet Union during 1990. It was a time of significant change for the Soviet Union and Lombard was the only Australian journalist based there since the ABC had established a bureau in Moscow in 1988.

Ray Martin and Daryl Somers may have missed out on the Gold Logie but both were successful in winning Logies for Most Popular Personality in their respective states, New South Wales and Victoria. Soapies Home And Away and Neighbours won Most Popular Program for NSW and Victoria respectively.

In Western Australia, viewers voted Seven Nightly News and newsreader Rick Ardon as the most popular from their state. In Tasmania their state-based awards were won by Tasmania Today and its co-host Robyn Martin.

The Logie Award for Most Outstanding Achievement By Regional Television was won by No Fixed Address, a documentary from WIN Television in Wollongong. Presented by Mary Franks, No Fixed Address examined the issue of youth homelessness, with the Wollongong and Illawarra area used as an example. The public response from the program included offers of support, accommodation and jobs to many homeless children. 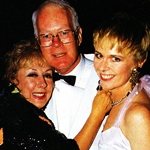 Permanent link to this article: https://televisionau.com/2016/05/tv-week-logie-awards-25-years-ago-6.html