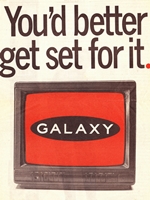 For years we’d been getting TV “free” — although we’d been paying for it all along with our taxes and indirectly through mark ups on anything we bought.

But on 1 January 1995 — twenty years ago — television expanded into a new galaxy… literally.

Pay TV had finally arrived. Like with most other media in Australia, it took a long time to get here. As far back as 1981 there was an inquiry by the Australian Broadcasting Tribunal into cable or pay TV in Australia. The inquiry received a number of submissions, including a proposal from a consortium of millionaire businessmen and media outlets to set up their own local cable TV system to high-rise buildings on the Gold Coast with later expansion into nearby suburban areas. The group, which included former Melbourne Lord Mayor Ron Walker, millionaire Sir Roderick Carnegie, Hoyts Theatres and Gold Coast radio station 4GG, proposed a three-channel service, covering a broad range of genres including a provision for R-rated content late at night. The radio station also had access to a television production facility which could lead to local programming being incorporated into the service. 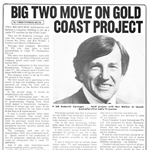 There were also submissions from a North Queensland group representing local newspaper The Daily Bulletin, and a company called Creative Youth Enterprises Pty Ltd which proposed that any cable TV system be obliged to provide a channel exclusively for children.

For years afterwards, the concept of pay TV became much talked about and much politicised. There was deliberation over who would or could own it, what technology or delivery platform it would use and how it would source programming.

On Sunday 1 January 1995, at 4.00pm, an undisclosed number of households in Sydney and Melbourne became the first in Australia to experience pay television, as Galaxy first flickered on with a “soft launch” of its sports channel, Premier Sports Network, playing mostly pre-recorded sports coverage eight hours a day. Its first program was an American basketball match.

The next phase in Galaxy’s launch came on Australia Day, 26 January, with the expansion of Premier Sports Network (PSN) to a 24-hour service, including live sport. The first face seen on the properly launched channel was veteran Melbourne TV identity Ron Casey, best known as host of the long-running World Of Sport. 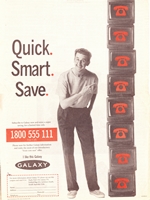 Subscription was $49.95 a month (waived until April) plus a $299 installation fee which was heavily subsidised by Galaxy to encourage new subscribers. The service was initially commercial-free as required by government legislation until mid 1997.

Galaxy, owned by Australis Media, was being delivered to households via microwave transmission — provided that their rooftop antennas had line of sight to Galaxy’s microwave transmitters in the Sydney and Melbourne CBD. By March the service was available in Brisbane, Adelaide and Canberra.

Galaxy’s reach was later improved with the launch of satellite transmission and with Galaxy’s suite of channels being on-sold via rival Foxtel. Optusvision (a joint venture between Optus, Nine Network and Continental Cable Vision) and Foxtel (News Corporation and Telstra) launched later in 1995. Foxtel promised an initial offering of 20 channels (including eight Galaxy channels and re-transmission of the five free-to-air networks) while Optusvision offered twelve. Both providers were being distributed via cable and the rollout of cable was a little discriminating. Only a handful of suburbs were included in the initial stages. In those suburbs one street could be cabled up, but the one next to it might not be. Also, even though Foxtel had a cable in a street it didn’t mean Optus had one too.

Viewers that did find themselves with a choice of providers could also be conflicted in choosing as each of Galaxy, Optusvision and Foxtel had exclusive contact deals with separate film and TV distributors. If viewers wanted to subscribe to multiple providers then that meant multiple tuners and installation and subscription fees.

Galaxy, faced with aggressive pricing from Optusvision and Foxtel and with both offering more channels, was to have only a short life. With debts of around $1 billion Australis Media went into liquidation in 1998, leaving its estimated 70,000 customers faced with blank screens, though its channels continued to be carried via Foxtel. Permanent link to this article: https://televisionau.com/2015/01/paying-for-tvs-new-galaxy.html