The presentation, on Sunday 18 May 1997, was hosted by Daryl Somers and held at Melbourne’s new Crown Entertainment Complex. The venue would go on to host the Logies for the following 20 years.

After the presentation, McCune paid tribute to her co-star and fellow Gold nominee Wood. “I kind of feel I owe him this award,” she told TV Week. “He was up for Gold and he has been so fantastic. So have the rest of the cast.” 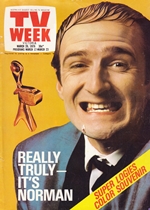 Leading the industry-voted categories is the Gold Logie for the TV Week Logie Awards Hall Of Fame — awarded to actor Garry McDonald. McDonald was met with a standing ovation when he took to the stage to accept his award. His career dated back to the late 1960s but his first leading role was in the comedy series Snake Gully With Dad And Dave in 1972. This was followed by The Aunty Jack Show, starring as Kid Eager and then as self-confessed TV megastar Norman Gunston. The success of the Norman Gunston character led to The Norman Gunston Show on ABC, which in turn led to a Gold Logie win in 1976 — the first time that the Gold Logie was awarded to a fictional character. Other credits included ABC comedies Flash Nick From Jindavick, Wollongong The Brave and The Of Show.

His next major role was as frustrated Arthur Beare in the ABC comedy Mother And Son that ran for six series over ten years. There were also lead roles in Eggshells and drama series Fallen Angels — both for ABC.

His Hall of Fame award was presented to him by Mother And Son co-star Ruth Cracknell. Given that much of his career revolved around ABC, in his acceptance speech, McDonald lamented brutal cutbacks being made to the broadcaster by the federal government — a concern that still resonates 25 years on.

The Silver Logie for Most Outstanding Actor was awarded to Water Rats star Colin Friels. “If there was any award I wanted to win, it was this one,” he said in his acceptance speech. “I am touched, honestly, that my peers would give me their nod. It is lovely to be appreciated by other actors.”

Frontline star Alison Whyte was awarded the Silver Logie for Most Outstanding Actress.

ABC also had wins with Somebody Now: Nobody’s Children Seven Years On for Most Outstanding Documentary. The documentary featured journalist David Goldie re-uniting with two of the subjects from his 1989 documentary on youth homelessness, Nobody’s Children, and finding out if their lives have changed in the years since.

ABC News won Most Outstanding Achievement In News for its reporting of the Port Arthur Massacre, in which 35 people were killed and 23 others were wounded.

The Nine Network’s Sunday won Most Outstanding Achievement In Public Affairs for its report “The Prisoners Who Waited”.

The Seven Network won Most Outstanding Achievement In Sport for its coverage of Kieren Perkins’ 1500m victory at the 1996 Atlanta Olympic Games. Permanent link to this article: https://televisionau.com/2022/06/tv-week-logie-awards-25-years-ago-12.html