Comedian Hamish Blake was awarded the Gold Logie for Most Popular Personality on Australian Television at the 54th annual TV Week Logie Awards. He had polled ahead of Adam Hills, Asher Keddie, Carrie Bickmore, Esther Anderson and Karl Stefanovic — with the short-listed nominees subject to an SMS vote that closed just as the Logies presentation began.

There was also celebration for Blake and his comedy cohort Andy Lee with their program Hamish And Andy’s Gap Year also winning a Logie for Most Popular Light Entertainment Program.

The awards were held on Sunday 14 April 2012 and televised on the Nine Network. Following the usual Red Carpet coverage, Gold Logie nominee Adam Hills was the first presenter on stage at Crown Palladium. Although Hills stressed that he was not hosting the show last night, his opening monologue showed that perhaps he was someone who should have been. 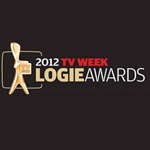 Kath And Kim stars Gina Riley and Jane Turner, in character as homewares housewives Prue and Trude, were also on stage to present an award.

It was a long night, with Shaun Micallef appearing on screen after midnight to announce Blake as the winner of the Gold Logie. Seven’s Packed To The Rafters came away with two Logies – Most Popular Drama and Most Popular Actor (Hugh Sheridan, pictured above with co-star Erik Thomson) – prompting an unusual response from star Rebecca Gibney: “For a show that’s in decline, we’re doing OK.” Seven’s other dramas Winners And Losers and Home And Away both collected the Most Popular New Talent awards for Melissa Bergland and Steve Peacocke (pictured below) respectively. Network Ten’s Bondi Rescue won again for Most Popular Factual Series, and the network’s coverage of the 2011 AFL Grand Final won Most Popular Sports Program. The network also ‘shared’ a Logie with ABC, with Asher Keddie (pictured below) winning the award for Most Popular Actress for her roles in Ten’s Offspring and ABC’s Paper Giants: The Birth Of Cleo. ABC took away a number of awards, particularly among the industry-voted categories, for programs including The Slap, My Place, Spicks And Specks and Four Corners. Adam Hills was awarded the Silver Logie for Most Popular Presenter, following a year that saw Spicks And Specks wind up after seven years and the debut of Adam Hills In Gordon Street Tonight, while Rob Carlton won Most Outstanding Actor for his portrayal of media magnate Kerry Packer in Paper Giants: The Birth Of Cleo.

SBS won the Logie for Most Outstanding Documentary Series for its widely-acclaimed series Go Back To Where You Came From.

There were musical performances from One Direction, Tony Bennett, Flo Rida and The Voice judges Seal and Delta Goodrem.

Ian ‘Molly’ Meldrum was inducted into the TV Week Logie Awards’ Hall Of Fame, with tributes from John Paul Young, Red Symons, Delta Goodrem, Dannii Minogue and Michael Gudinski. The former Countdown and Hey Hey It’s Saturday presenter was recovering from severe injuries sustained from a fall just before Christmas and was not able to attend the awards presentation.

With the debut of The Voice followed by the four-hour Logies telecast, the Nine Network claimed a massive ratings victory on a night where all three commercial networks rolled out the big guns to kick off the ratings after the Easter break. The Seven Network rivalled Nine’s lineup with the series return of Dancing With The Stars, while Network Ten screened the network premiere of Hollywood blockbuster Avatar. Permanent link to this article: https://televisionau.com/2022/06/tv-week-logie-awards-10-years-ago-11.html