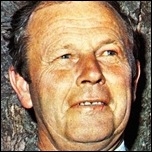 Born in Melbourne in 1916, Bleazby was a radio announcer and actor at Melbourne station 3XY when he enlisted at the break out of World War II in 1939.  He served with the AIF in the Middle East for two-and-a-half years and rose to the rank of captain, but when his radio background was discovered he was transferred to broadcasting duties for the AIF at Radio Jerusalem.

In 1945 he returned to 3XY and furthered his acting career, leading to roles in early TV drama productions including Seagulls Over Sorrento, Consider Your Verdict and Homicide.  In 1967 he was cast as Col. Jim Emerson in ABC’s Bellbird.  It was his first ongoing TV role, but it was a series that he didn’t give much of a chance.  “I gave it about three months,” he told TV Times in 1974.  “It was surprising to me at the time that it took off the way it did but it has developed a lot since then.  I think the very ordinariness of the people helped viewers identify with them and helped its early success.”

Despite the ongoing commitment to Bellbird, production breaks allowed him to make guest appearances in other dramas such as Ryan, Hunter, Matlock Police, The Long Arm, Division 4 and Power Without Glory.

After Bellbird wound up in 1977, he made guest appearances in Skyways, Sons And Daughters, Prisoner, The Flying Doctors and Home And Away.  He also starred in films Country Town (the movie spin-off from Bellbird) and Annie’s Coming Out.