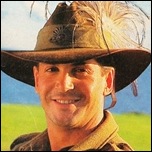 Jon Blake, the promising young actor whose career was cut short following a road accident which rendered him paralysed with permanent brain damage, has died from pneumonia at the age of 52.

Blake was still a teenager when he was cast as Alan Archer in the 0-10 Network soap The Restless Years in 1977.  He later appeared in TV series Boy In The Bush, Five Mile Creek, A Country Practice and the landmark mini-series Anzacs.

He appeared in movies including Freedom, Cool Change, Running From The Guns and The Lighthorsemen. It was in 1986 while driving home from South Australia after The Lighthorsemen’s final day of filming that he was involved in the tragic accident, about 40 kilometres from Port Augusta, that led to him being in a coma for months and with permanent brain damage, leaving him totally incapacitated.

His compensation payout from the accident was partly calculated based on his estimated potential earnings in Hollywood.

For many years Blake was in the care of his mother Mascot until she died in 2007.  Recently, Blake’s son Dustin won a legal battle to take care of his father and also took his father to finally see a cinema screening of The Lighthorsemen.

Blake’s family have extended thanks to all the volunteers, carers and nurses that assisted in his care over the past 25 years.

A funeral is expected to be held later this week.

Permanent link to this article: https://televisionau.com/2011/05/obituary-jon-blake.html