A Country Get-Together
Around 150 past and present cast members of A Country Practice gathered at a Sydney harbourside restaurant to celebrate the series’ 1000th episode.  The show’s creator and producer James Davern said that even after 1000 episodes there is still plenty of life in the series.  “I am proud to be associated with A Country Practice.  Even after 1000 episodes and nearly 12 years, there are always new issues to explore, new faces in the acting business and fresh ideas from the writers.  A Country Practice has plenty of room left to develop,” he said.  The 1000th episode is due to go to air in May. 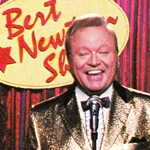 Back to the future
As reported last week, Good Morning Australia host Bert Newton has featured in a TV commercial for the launch of a new soft drink, Tab Clear.  “I did many soft drink commercials in years gone by, but I didn’t think I’d be doing them at this stage of my career,” he said.  In the retro-themed commercial, it’s 1962 and a young Bert is busking in the street.  One taste of the new soft drink and he’s transformed into a suave performer with his own TV show (pictured).

Elle to pay!
Live And Sweaty‘s new host Elle McFeast (Libbi Gorr) has had to made quite a sacrifice in taking on her new job — it meant moving from her beloved Melbourne and its sporting culture to Sydney.  However, McFeast has taken on something of an unofficial role of cheerleader for local AFL team the Sydney Swans.  “I’ll be taking them under my wing and leading them to bigger and better things,” she said.  For McFeast, hosting the late-night show feels like something of a landmark for women in television.  “I am probably the youngest woman who has done this sort of late-night television hosting caper, apart from Wendy Harmer, who is a true pioneer,” she said.  Joining McFeast on Live And Sweaty will be regulars Debbie Spillane, Karen Tighe, Peter ‘Crackers’ Keenan and Lex Marinos — but McFeast is a bit indifferent when the name Rex Mossop is mentioned.  “If he wants to come back on the show, he must learn my name,” she said.  “He keeps calling me dearie.  Now do I look like a dearie?”

The View From Here: Lawrie Masterson 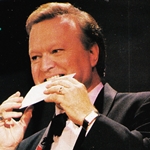 “To be honest, I’m sure this year’s Logies — Bert Newton‘s 18th as compere — was not the most enjoyable from his point of view.  It was a long night — too long — and, with all due respect to those involved on camera, it’s probably safe to say it fades a little in comparison to some past Logies.  Yet I reckon this was one of Bert’s best nights as a performer and Logies host, just because of the sheer degree of difficulty.  There were some technical glitches at the top of the show, which would have thrown many a mere mortal.  For Bert, however, they just seemed to underline the fact that it was going to be a big night of live television, with the pressure on all the while.  He just trouped on, handling with aplomb everything from the gags to a couple of very sincere tributes.  Coming from anyone else, they might have sounded empty.  From Bert, they rang true.  The presentation of a special achievement award to GP teenager Tracie Sammut was a delicate segment… and again it was handled superbly, becoming one of the night’s “moments”.”

Program Highlights (Melbourne, April 11-17):
Easter Sunday:  Seven presents the Easter Sunrise Service from the Sydney Opera House (7am).  Tim Webster hosts Ten’s coverage of the James Hardie 12-Hour motor race at Mount Panorama — starting at 6.00am for an hour, then with updates at 10am and 11am before five hours of coverage from midday.  Seven’s Sunday AFL includes Brisbane Bears versus Melbourne, live from Brisbane, followed by West Coast Eagles versus Richmond, live from Perth.  Sunday night movies are Making Mr Right (Seven), Avalon (Nine) and Cry Freedom (Ten). 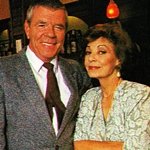 Tuesday:  Ray Martin makes a guest appearance in All Together Now (8pm, Nine), as Bobby Rivers (Jon English) begins a publicity campaign to declare to the public that he is alive and well after Wayne (Bruno Lucia) starts a rumour that the Seventies rocker has died.  In A Country Practice (7.30pm, Seven), the developing romance between Frank Gilroy (Brian Wenzel, pictured) and April Patterson (former Number 96 star Elaine Lee, pictured) is dealt a blow.

Saturday:  In Beyond 2000 (7.30pm, Seven), Andrew Waterworth discovers that international projects are uncovering the function of many genes, allowing many more genetic disorders to be identified.