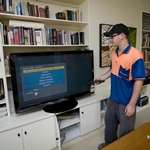 By the end of 2013 all free-to-air television in Australia will be digital-only — but that’s not quite the end of our transition to digital television. Coming up is the retune! As analogue television is switched off in each area the broadcast spectrum will be re-organised, or ‘re-stacked’, to make better use of the frequencies …