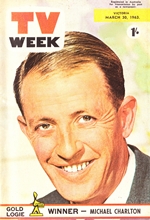 Four Corners host Michael Charlton was awarded the Gold Logie for Most Popular Personality on Australian TV at the 5th annual TV Week Logie Awards — but the lavish showbiz ceremony that was to take place at Sydney’s Chevron-Hilton Hotel on Saturday, 23 March 1963 was not to be. The Awards’ overseas guest, British comedian …

END_OF_DOCUMENT_TOKEN_TO_BE_REPLACED

Musician, composer and conductor Tommy Tycho has died aged 84 after suffering complications of pneumonia. Born in Hungary, Tycho started his career as a pianist for ABC radio in the 1950s.  With the advent of television Tycho moved to Sydney channel ATN7, performing on the station’s opening night program in December 1956. By 1957 he …

END_OF_DOCUMENT_TOKEN_TO_BE_REPLACED

Permanent link to this article: https://televisionau.com/2013/04/obituary-tommy-tycho.html