The awards were hosted by Bert Newton and held at Melbourne’s Southern Cross Hotel on Friday 21 March 1969. The presentation was telecast by the Nine Network, shown live to Sydney and Melbourne and videotaped for delayed broadcast in other cities. It was estimated that the Logies presentation was watched by around four million viewers. The Gold Logie was Kennedy’s third — he’d previously won in 1960 and 1967 — and came as he had finally claimed to break into the Sydney market, something which had long been a source of frustration for the Melbourne-based star.

For the second year running, TV Week had deemed there to be no single female with sufficient votes on a national scale to justify receiving a Gold Logie. Johnny Farnham, a former plumber turned pop star, won the Logie for Best Teenage Personality. The 19-year-old became a household name with the song Sadie The Cleaning Lady and was on the verge of taking his career overseas, with visits planned to the United Kingdom and United States and had been booked for an appearance on The Ed Sullivan Show. The Best Australian Variety Show award for the third year in a row went to the Nine Network’s Sound Of Music, hosted by Bobby Limb and wife Dawn Lake. The award came just days after Limb had announced plans to take the show across to the rival 0-10 Network.

The Seven Network‘s Homicide won Best Australian Drama for the fifth year in a row.

ABC sitcom I’ve Married A Bachelor won the Logie for Best Australian Comedy. Starring Peter Whitford, June Thody, Donald MacDonald and Aileen Britton, the series about a young newlywed couple with a husband reluctant to give up his bachelor ways entirely, was a ratings hit for ABC and had also sold overseas. At the time of the award, I’ve Married A Bachelor had just been renewed for a second series. ABC film Talgai Skull, documenting the archaeological discovery of the first fossilised evidence of early human occupation in the Talgai region in Queensland, won the Logie for Best Australian Documentary.  Such was the acclaim of the 55-minute film that its producer and director Tom Haydon was soon offered a job with BBC to co-produce a documentary series on the rise and fall of the British Empire. 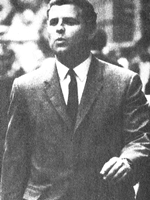 A cigarette commercial featuring advertising executive Tony Barber, who had been seconded at the last minute to appear in the advertisement, won the Logie for Best Commercial. Featuring Barber “whistling” through Martin Place in Sydney, the commercial was seemingly a hit with viewers and its product, Cambridge. Barber was soon to find further TV fame as a game show host for many years.

The 1969 awards inaugurated a new category — the George Wallace Memorial Award For Best New Talent. Named in honour of recently departed comedian George Wallace, the first award went to actor Gerard Kennedy, formerly of the spy drama Hunter and, at the time of the award, the lead actor in police drama Division 4. Kennedy received his award from Wallace’s widow, Marj. American comedy series Rowan & Martin’s Laugh-In won the Logie for Best Overseas Show. Just as it had been a hit in the US, the controversial series of kooky and socially risque gags was a hit for the 0-10 Network in Australia.

The second special award, Best Export Production, was presented to Skippy The Bush Kangaroo. The children’s adventure series was not just a hit in Australia but was an international success, with sales to 80 countries and in syndication across 160 local stations in the United States. Accepting the award were series co-stars Ed Deveraux, Ken James and Skippy herself. 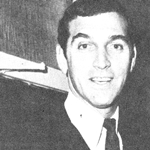 In the state-based awards, Sydney Tonight host Don Lane won his fourth Logie for Best Male Personality in New South Wales. The win came after a controversial year for Lane, who was absent from television for four months while he was waiting to go on trial on charges of importing marijuana into Australia. He had spent four nights in jail while the jury was deciding his fate, but Lane was then declared not guilty. His return to television gave him another blow, when Tonight was cut back to one episode a week. But by the end of 1968 he had secured a new contract with Nine and was busy working the club circuit.

“I had my fingers crossed for this award,” an emotional Lane said in his acceptance speech, “and I should like to thank the people of New South Wales for believing in me when I needed them most.” 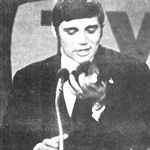 Anderson claimed to have been enamoured with some of the Australian slang that she hoped to take back to Hollywood. “When we arrived in Sydney, somebody at the airport said we must now ‘crash on’ to our hotel in the city. ‘Crash on?’, I asked, ‘for God’s sake what does that mean?’. But the one which really threw me when was when somebody hadn’t arrived and we were told he had probably shot through like a Bondi bus.” 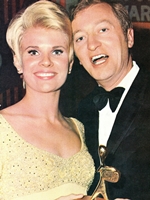 Permanent link to this article: https://televisionau.com/2019/06/tv-week-logie-awards-50-years-ago-9.html