Bill Collins, whose Golden Years Of Hollywood made him a favourite for generations of viewers, has died peacefully in his sleep. He was 84.

Although he had a love of movies since he was a young child, his career was not headed in that direction. He was a lecturer at Sydney Teacher’s College when he started presenting movie reviews for ABC‘s Roundabout program in 1963. He also began writing movie reviews for TV Times magazine. 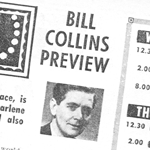 A few years later he joined Sydney’s TCN9 to host The Golden Years Of Hollywood. In the mid-1970s he moved to rival channel ATN7 as movie host, including presenting movie reviews on the Sunday night news.

He gained a national profile when he joined the Ten Network in 1980, bringing his double-features on The Golden Years Of Hollywood to Saturday nights for over a decade. His enthusiastic introductions, intermissions and interviews were as popular as the movies themselves. He also hosted midday movies, The Bill Collins Picture Show and Sunday matinee movies. He also wrote movie reviews and had a weekly column in TV Week during the 1980s.

Television was changing in the 1990s with the advent of pay-TV, and Collins made the move to Foxtel when it launched in 1995. He continued The Golden Years Of Hollywood for Foxtel up until last year.

He received an Order of Australia Medal in 1987, was inducted into the TV Week Logie Awards Hall of Fame in 2009 and, in his 50th year on television, won the inaugural ASTRA Award for Lifetime Achievement in 2013.

His wife of 36 years, Joan Collins, said in a statement issued by Foxtel: “Our hearts are broken by the loss of our dear Bill – he will never be forgotten. How fortunate we were to have him in our lives. On behalf of Bill’s family and myself, I would like to thank the public for the great support given to Bill over the years.

“Bill’s love of film was encouraged by you, his audience, and his love of sharing his passion, which increased over the five decades that he presented on every Australian television. Bill was always thrilled when he realised the joy and happiness he gave to his viewers. He never took them for granted, always wanting to please.

“Darling Bill you will be loved and missed always.”

Permanent link to this article: https://televisionau.com/2019/06/obituary-bill-collins.html