Cop Shop, the popular Crawfords police drama of the 1970s and early ’80s, is coming soon to DVD with a box set of the first 26 episodes.

This year marks the 40th anniversary since the show debuted on our screens. The first episode aired on the Seven Network in Sydney and Melbourne on 28 November 1977 and focused on the fictional Riverside police station.

Cop Shop represented a successful return to the police genre for Crawfords. The company had suffered the cancellation of Homicide, Division 4 and Matlock Police within months of each other in 1975, and subsequent projects Bluey and Solo One failed to pick up significant interest.

Unlike the earlier police dramas, Cop Shop also incorporated the increasingly popular soap opera element. Storylines relating to the personal lives of the police station staff were ongoing while the traditional police procedural stories changed from week to week.

Cop Shop‘s original cast were mostly familiar faces. George Mallaby had come from Homicide and The Box; Tony Bonner from Skippy The Bush Kangaroo and Power Without Glory; Peter Adams, Rowena Wallace and Joanna Lockwood from Number 96; Paula Duncan was also from Number 96 as well as a more recent stint in The Young Doctors, Patrick Ward from Class Of ’75 and The Unisexers; Peter Sumner from Spyforce, and Terry Norris and Gregory Ross from the recently-axed Bellbird. Teenager Joanna Moore had previously starred in the movie The Getting Of Wisdom.

Paula Duncan and John Orcsik went on to become the show’s star couple both off-screen and on. The pair were never far from the front cover of TV Week. They became married in real life and their characters did the same about a year later. 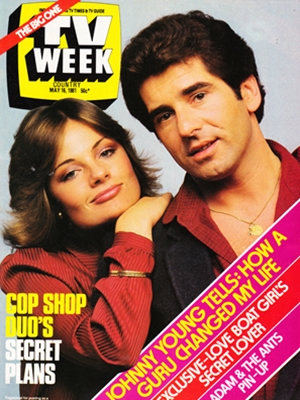 Former Bellbird actress Louise Philip, in a wheelchair since a car accident as a teenager in the early ’70s, was later to join the cast, coincidentally working again with former Bellbird co-star Terry Norris. The role allowed Philip (pictured below with Norris and Gregory Ross) a profile to allow her to promote equality for people with a disability. She exited the series after four years with plans for stage work and to get into directing. She also got a job as a reporter for a Network Ten magazine program, Together Tonight. In its fourth year Cop Shop did an unusual crossover with fellow Crawfords/Seven drama series Skyways, which was set in an airport. New Zealand actor Bill Stalker, who played airport security chief Peter Fanelli in Skyways, took the same character across to Cop Shop after Skyways was cancelled early in 1981. Stalker’s run with Cop Shop — with Fanelli making a return to the police force — was only to be around nine months, with the actor deciding to quit having played the character for three years by that stage. Fanelli’s wedding to girlfriend Yvonne Holmes (Annette Andre) was to signal his exit from the series. Stalker had ambitions of tackling a film career but tragically, just after the wedding scenes had been filmed at the end of 1981, Stalker was killed in a motorcycle accident. The wedding episode went to air in April the following year.

The series, which continued for 582 episodes through until 1984, was a ratings hit for the Seven Network, winning a string of TV Week Logies including Best New Drama (1978), and Most Popular Program In Victoria (1982, 1983). Paula Duncan won the Silver Logie for Most Popular Lead Actress (1980) and Logies for Most Popular Female Personality In Victoria for four years in a row (1981-84). Peter Adams, Terry Norris  and John McTernan also collected Logies during the show’s run.

Cop Shop is the latest of the classic Crawfords archive being released on DVD and will be available from 25 April. Other titles include Homicide, Division 4, Matlock Police, Bluey, The Box, The Sullivans, Carson’s Law, All The Rivers Run, The Flying Doctors, Acropolis Now and children’s series The Saddle Club.

Crawfords Australia is a division of WIN Corporation.