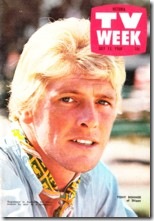 Yesterday’s newspapers reported that veteran actor Tony Bonner has lodged a claim with the NSW Supreme Court seeking residuals from forty years of syndication and merchandising of the classic children’s TV series Skippy The Bush Kangaroo.

Bonner (pictured, in 1968), who played helicopter pilot Jerry King in the show’s first series – it went for three – is reportedly seeking an amount that could reach into the millions given the amount of merchandising and overseas sales the series has generated.

More than 120 countries have seen Skippy The Bush Kangaroo, although it is many years since the original series has been shown on Australian TV despite almost continual reruns during the 1970s and 1980s. The series was remade in the early 1990s as The Adventures Of Skippy, and in more recent times all three series of the original Skippy production have been released on DVD.

The now 64-year-old actor, who went on from Skippy to appear in numerous other series including Cop Shop, Skyways, Carson’s Law, and Anzacs and more recently seen in a series of McDonald’s commercials as fictional ‘burger naming legend’ Ken Thomas, claims the lawsuit isn’t about money (“anybody who knows me will testify to that”) but would like to be formally recognised for his contribution for a series that has become an Australian icon:

“When I signed on for the first season of Skippy I was a young, and probably naive, actor, and I was given a verbal agreement that if the show was successful after the first season then we’d talk about a few more bikkies in the bikkie tin. When it did become successful I soon realised there wasn’t going to be anything forthcoming.”

“For years people have thought I was earning a lot of money from the show, but I haven’t received a single cent since my last pay cheque from Fauna (about $200) in 1968. When I saw the latest boxed set of DVDs I thought, ‘I’ve had enough’.”

The actor’s claim for residuals is a familiar cry from actors who appeared in early TV series that have seen their work paraded in syndication and re-runs for decades, but their original contracts made no provision for residual payments.