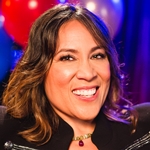 It began as an experiment in overnight television. Now, Rage is turning 30.

ABC is planning a cross-platform celebration to take a look at the history of Rage and how it has shaped musical talent and viewers’ tastes over the decades.

Among the special programming is Rage30: The Story Of Rage, a one-hour special to be broadcast on Monday 17 April at 9.30pm.

Kate Ceberano (pictured) will present Rage30: Stories From The Red Couch (11pm, 21 April), taking a look back at the hundreds of Rage guest programmers who have graced the infamous red couch over 30 years.

There will also be a special, Rage ‘Til You Puke, via ABC podcasts The Real Thing and The J Files, plus a magazine, album, merchandise and an exhibition at ABC’s Ultimo headquarters in Sydney.

This one hour documentary celebrates the incredible history of Rage and features a plethora of musical talent from across the decades, musicians whose work has been a mainstay of Rage but who were also viewers themselves. We go back to the beginning to find out where and how it all began and talk to many of the most successful music clip directors for whom Rage directly influenced their careers.

Via a nationwide social media campaign Rage viewers have been invited to guest program the show. Thousands have taken up the challenge and the most creative, thoughtful and entertaining will be broadcast over these two special nights. Each viewer playlist selected will display the contributor’s name.

Over its three decades on air Rage has hosted hundreds of guest programmers; musicians, comedians and even politicians have been invited to share their favourite music clips and explain why they mean so much to them. In the process, we gain a unique insight into them as people. This special program, hosted by the one and only Kate Ceberano, assembles the very best, from the famous, the funny to the very naughty.

The Real Thing – Rage ‘Til You Puke

RN’s The Real Thing podcast a half-hour special featuring interviews with the musicians, personalities, producers and fans who brought the program to life. Rage ‘Til you Puke will be available from The Real Thing and Double J’s The J Files podcast feeds from Thursday April 14 and will air on both RN and Double J simultaneously on Easter Monday.

Brace yourself for even more couch consumption as we say Happy 30th Birthday to our favourite music rebel with a special edition magazine. Packed with behind-the-scenes Rage guest programmer tales, including Faith No More, Hole, the Smashing Pumpkins and Weezer, we also delve deep into the music clips that have kept you up all night — dissecting the LOLs, the controversy, the culture, the hidden messages and stacks more. Penned by revered music writers including Myf Warhurst, Craig Schuftan and Lindsay McDougall — to name but a few — your eyeballs will be lured into bloodshot temptation of “just one more page”.

This massive compilation features standout tracks from across the three decades Rage has been on air. Songs that have resonated with fans and artists covering all genres, ages, genders and nationalities; it’s the definitive Rage collection.

You’ll be able to wear a piece of Rage history with one of our special release Rage logo t-shirts. Various designs and sizes available.

Come and sit on the Rage couch, snap a selfie and share. Permanent link to this article: https://televisionau.com/2017/04/rages-30th-birthday-celebrations.html