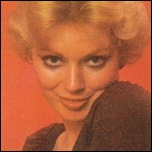 In the 1970s and ‘80s, Lynda Stoner was one of TV’s glamour girls.  After being crowned Miss TV Times (pictured) in 1976, she went on to star in popular dramas The Young Doctors, Cop Shop and Prisoner.

But, in a report this weekend in the Sydney Morning Herald, Stoner’s latest ‘role’ is as far removed from the bright lights of showbiz as can be imagined.

”The only way to do it is to go in there and try to dissociate, to mentally put yourself in another place and know that you’re doing it to try to get this terrible thing stopped.”

”It’s such an underground culture. I’ve spoken to other hunters; they are so disparaging of pig doggers. They are the lowest of the low.”

”If they’re proposing this is to reduce the number of feral animals, it’s the most disgusting, most barbaric, most brutal thing they could do.”

The full report is on the Sydney Morning Herald website.

Permanent link to this article: https://televisionau.com/2010/06/lynda-stoner-goes-undercover-for-animal-rights.html