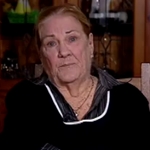 Network Ten‘s breakfast program Wake Up hasn’t succeeded in gaining much of an audience since it launched in November last year — but an interview on Wednesday’s program has caused a stir on social media.

The morning after Treasurer Joe Hockey handed out his “heavy lifting” federal budget, Prime Minister Tony Abbott was facing the music on Wake Up from feisty pensioner “Vilma”, who wasn’t having a bar of this budget.

Some keen twitterers had observed that “Vilma” wasn’t just an anonymous pensioner — but rather Vilma Ward, a well-known identity in Queensland and a long-standing campaigner on issues ranging from morality to consumerism — and politics. Vilma Ward, pictured right, in Bailey And The Birds