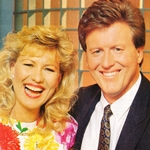 Former daytime TV queen Kerri-Anne Kennerley has denied rumours that she is headed for a return to the Ten Network to reprise the classic Good Morning Australia format.

“Thirty years of 5am starts, hmmm, let me think about that,” Kennerley told News.com.au, reflecting on a lengthy career that has included 11 years on the original Good Morning Australia and nine years on Mornings With Kerri-Anne. “Look it’s sort of back to the future. All I know is there are clearly a few issues” — referring to the ratings struggles of Ten’s current breakfast show Wake Up.

She added that despite some recent appearances on Ten, including guest spots on The Project and Wake Up, she is not contracted to anyone and is still a free agent.

Kennerley then gave her take on where the financial wheels fell off the network after its heyday in the 1980s:

“Channel Ten in those days was number one.

“The news was number one, Perfect Match was the lead in and that was a hugely rated program.

“It was number one all round.

“And right towards the end, when the Canadians bought Channel 10 and pulled the plug on everything, it all wound down. And that’s when they started putting The Simpsons on.

“It hasn’t been the same since and it is a shame.

It was actually the Canadians who rescued the network, not pulled the plug as Kennerley asserts now.

It is true, Ten was very successful during the 1980s. Rupert Murdoch had built up the network’s profile after buying TEN10 Sydney and ATV10 in Melbourne. The big cheques were flying thick and fast with big budget mini-series and dramas, blockbuster movies and securing the rights to two Olympic Games — Los Angeles in 1984 and Seoul in 1988. Eyewitness News had become a ratings hit, challenging the dominance of National Nine News. Perfect Match set ratings records for the 5.30pm timeslot when it began in 1984, and the risk in taking over Neighbours from the Seven Network was paying dividends with high ratings and overseas sales.

Good Morning Australia, which Kennerley co-hosted alongside a changing line-up of male colleagues (including Tim Webster, pictured), was a consistent performer. It began in February 1981 and triggered the revival of breakfast news on TV, leading to Nine launching Today the following year.

But the rot set in later in the decade. The extravagant spending and expensive contracts indulged in by all three commercial networks from their next generation owners — Christopher Skase at Seven, Alan Bond at Nine and Frank Lowy at Ten — had caught up with them as the economy fell into recession. In Ten’s case the situation was not helped by a raft of new shows — including US comedies Roseanne and Sledgehammer, drama Thirtysomething and local soap E Street — failing to meet their ratings expectations.

An attempt to halt the ratings slide led to the hiring of an American TV executive, Bob Shanks, who saw Ten’s recovery in game shows and a new branding — 10 TV Australia. The revamp saw ratings drop further — with most of the new game shows axed after only months and Shanks sent back to the US.

A year later Ten had fallen into receivership and had faced massive budget cuts and staff redundancies as it sought to stop losses amounting to $2 million a week across the network.

Good Morning Australia was fortunate as one of the few shows to survive, but had to make do with a smaller budget. (Kennerley left the program at the end of 1991 and it continued for another twelve months before the name was adopted by Bert Newton‘s mid-morning show in 1993)

The receivership led to a much leaner organisation and with the help of shows like The Simpsons, it started to claw back market share and advertising revenue by targetting the under-40 age groups.

Canadian media company CanWest came on board as a major shareholder shortly after and continued to drive Ten’s move back into profitability.

CanWest sold their 50.1 per cent share in the network in 2009 — ironically at a time when Ten was on a ratings climb with new shows MasterChef Australia and Talkin’ ’bout Your Generation.

Since then the network has been struck by management instability, a downturn in the advertising market and a confused programming strategy as it comes to grips with the multi-channel environment and its former youth demographic now being targetted by a range of traditional and non-traditional media.

Last year Ten ended the year behind the ABC in prime time ratings for the first time in decades — possibly ever.

Permanent link to this article: https://televisionau.com/2014/05/kak-denies-ten-comeback-and-stirs-up-history.html