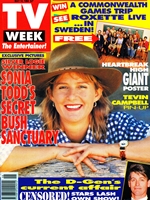 Cover: Sonia Todd (Police Rescue) The D-Generation of current affairs The nightly chase for ratings between A Current Affair and Real Life has inspired the D-Generation‘s newest project, Frontline. The 10-part ABC series goes behind the scenes of a fictional current affairs program hosted by Mike Moore, an ex-ABC journalist now thrust into the commercial …

END_OF_DOCUMENT_TOKEN_TO_BE_REPLACED

ABC‘s Asia-Pacific television channel, Australia Network, is set to be scrapped after the handing down of the first federal budget of Tony Abbott’s government. The move to scrap the satellite service, which currently broadcasts to 44 countries and to an estimated audience of millions across the Asia-Pacific region, is of no real surprise as government ministers …

END_OF_DOCUMENT_TOKEN_TO_BE_REPLACED

Permanent link to this article: https://televisionau.com/2014/05/australia-network-set-to-be-axed.html