Community TV channel 44Adelaide has been broadcasting exclusively in digital since May 2012.

Adelaide becomes the first state capital city in Australia to convert to digital-only television.  As of the most recent Digital Ready survey, covering the period October to December 2012, around 92% of Adelaide households have already converted their main TV set to digital — up from 90% in the previous quarter and 83% twelve months earlier. The switch off of the analogue signals brings an end to over 50 years of analogue television in South Australia.  The first station to open was NWS9, owned by a young Rupert Murdoch, in September 1959.  The NWS call-sign was derived from the name of Murdoch’s Adelaide newspaper, The News.

Adelaide’s third commercial channel, SAS10, arrived in July 1965 and it was then another twenty years until the next new channel — SBS — arrived in June 1985. 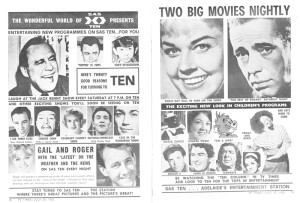 ADS7 and SAS10 made TV history in December 1987 when ownership changes earlier in the year led to ADS7 being controlled by Kerry Stokes, whose other TV interests were aligned to the Ten Network, and SAS10 was owned in common with Perth channel TVW7, linked to the Seven Network  The owners made the unique decision to “swap” their broadcast frequencies and affiliations in Adelaide to match them up to their TV alliances elsewhere.  The change was scheduled to happen after both channels had closed for the night on 26 December 1987.  Technically it was a process that only took about 15 minutes — as the 7 and 10 transmitters were located at the same tower so it was almost as simple as each channel swapping the plugs between the two transmitters.

When both stations resumed broadcasting the next morning, ADS7 had become ADS10 and a member of the Ten Network, while SAS10 became SAS7 and part of the Seven Network.  The changeover meant little to viewers — they would still see Seven Network programs on Channel 7 and Ten Network programs on Channel 10 — but it meant that locally-based programs and presenters would be seen to “swap” channels.  The quirky changeover led to some awkward moments… like Seven National News presenter Peter Sellen signing off at the end of the bulletin on Saturday, 26 December 1987 prompting viewers, “we’ll see you tomorrow on Channel Ten…”

Similarly, Ten’s Eyewitness News presenters signed off at the end of their Saturday night bulletin with “please join us on Seven”.

Analogue television was switched off in regional South Australia more than two years ago.

The Adelaide analogue shutdown is the first for this year but by the end of the year all remaining analogue signals will be phased out on the following dates:

Permanent link to this article: https://televisionau.com/2013/04/d-day-its-adelaides-turn.html