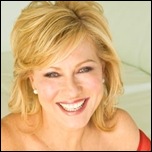 Just weeks after hosting her final Kerri-Anne show on the Nine Network, Kerri-Anne Kennerley has now departed the network despite previous reports she was staying on board for “future projects”.

It ends a nine-year association with Nine as host of Kerri-Anne (previously Mornings With Kerri-Anne) although her history with the network goes back way further – as host of Midday and brief stint as co-host of What’s Cooking in the 1990s, and in the 1960s was a presenter on Everybody In at Brisbane channel QTQ9.  She was also a regular performer on Nine’s The Mike Walsh Show.

The future of the Kerri-Anne show was subject to a lot of speculation during 2011 as it was being soundly beaten in the ratings by Seven’s The Morning Show, and towards the end of the year she was on leave for several weeks while guest presenters filled in.  Kennerley later said in a radio interview that the first she knew of her axing from the show was from a newspaper article.

The irony in her departure from Nine is that she appears to be heading to Seven as a contestant in the upcoming season of Dancing With The Stars, the show whose co-host Sonia Kruger has just severed ties with Seven – after more than a decade – to take Kennerley’s place at Nine.

Kruger is set to co-host Nine’s revival of the Mornings brand (with singer David Campbell) as well as the network’s upcoming return of former reality giant Big Brother.

Apart from Dancing With The Stars it is not known if Seven might have other plans in mind for Kennerley but they have been known to use the show as a vehicle for cross-network promotion, and DWTS would provide a strong platform to promote any new Kennerley venture.

Permanent link to this article: https://televisionau.com/2012/01/kerri-anne-dances-across-to-seven.html