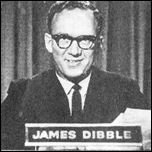 James Dibble, one of Australia’s first television newsreaders, has died from cancer at the age of 87.

A former radio announcer, Dibble made history when he presented ABC’s first television news bulletin on the opening night of ABN2, Sydney, on 5 November 1956.

As ABC’s principal newsreader in Sydney, he also read the broadcaster’s first news bulletin after the official changeover to colour transmission in March 1975:

After 27 years Dibble presented his last bulletin in June 1983, witnessed by a studio audience of around 80, and was honoured with a civic reception on his retirement.

Richard Morecroft, who succeeded Dibble as ABC newsreader in Sydney in 1983, paid tribute to his predecessor:

“I was a little surprised at how modest a man he was for somebody who had such an extraordinary reputation.”

Permanent link to this article: https://televisionau.com/2010/12/obituary-james-dibble.html