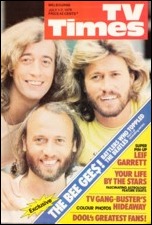 Meldrum’s TV hit at heroin
Heroin addiction has claimed the lives of four of his friends, so Ian ‘Molly’ Meldrum has decided to use his profile as a national TV presenter to do something about it. The Countdown host has been given the go-ahead by ABC to produce a documentary to highlight the dangers of heroin addiction. “This is the most important project in my life at the moment. Four of my friends have died from heroin and I have gone through the hell of living with one of them,” he told TV Times.

Things go boom for Willesee
The Willesee At Seven team is thrilled at ratings figures that indicate that the daily current affairs format is far from dying despite the recent axing of A Current Affair on Nine. The program, hosted by Mike Willesee, is winning its timeslot in Sydney, and beaten only by Nine’s The Sullivans in Melbourne. Producer Phil Davis has also just announced a new recruit, former TEN10 producer and newsreader Peter Hanrahan, to the reporting team. 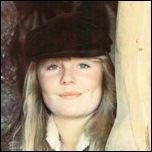 Colour her ambitious!
Thirteen-year-old Arkie Whiteley (pictured) is aware that her dad, artist Brett Whiteley, is the famous one in her family. But one day, Arkie says, he will be known as her father. The young actress has already been to a drama school in England and made her acting debut in a London Weekend Television series People Like Us. She has already made guest appearances on The Young Doctors and has a role in the upcoming ABC production A Place In The World, but has no aspirations to challenge her father’s artistic talent, “An artist? No! Everyone expects me to be like my father, brilliant at art and that sort of thing. I just sit there and do these pathetic little paintings. I can’t draw. But then, he can’t act!” 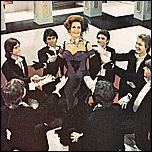 Everybody loves Saturday night!
ABC is hoping to liven up Saturday nights with glamour and music as the main ingredients of its new lavish variety series The Saturday Show, beginning this week. Regular performers on the show include Suzanne Steele (pictured, centre), John MacNally, Phillip Gould, Debbie Byrne, dance troupe The Natural Seven, Brian May and the ABC Show Band, and guest performers including Frank Thring, Johnny Lockwood and Bobby Limb.

Viewpoint: Letters to the Editor
“What beats me on TV is the incredible number of comperes and others introducing shows, who sign off with the inane remark, “See you next week,” or whatever. We can see them but it would be a miracle if they saw us. Don’t they realise how stupid they sound?” W. Blackall, WA.

“I would like to commend The Sullivans and The Young Doctors. In my opinion they are of a very high standard and certainly as good as anything to come from Britain or America. However, the producers of Cop Shop obviously tries to emulate some of the cheaper dramas from these countries, in which men wear shirts too small for them and have their collars wide open. This is to let the viewer know that these people are tough. To me they look like slobs in a cheap production.” W. Beaton, SA.

“Will someone please explain the following to a poor galah with no brains who is puzzled by some of the mysteries on TV? Why does Norman Gunston cut himself while shaving? Why is it always the husbands who cough, and why don’t they administer their own cough mixture instead of their wives having to do it? Why does coffee have to be 43 beans per cup? Why not 40 or 50? And how do they get the lemons to jump back into the packet, and are they real ones or dummies?” W. Bodfish, QLD.

What’s On (July 1-7):
HSV7 screens Shirley Bassey – Australia 78, a concert recorded at Sydney’s Hordern Pavilion. Songs include Big Spender, Goldfinger, Johnny One Note and The Greatest Performance Of My Life.

The Nine Network presents live via satellite coverage of the final stages of the Wimbledon tennis championships from London. Former Seven commentator Mike Williamson will head Nine’s coverage, which will air between 11.00pm and 4.30am from Wednesday through to Sunday and includes men’s and women’s semi-finals, men’s and women’s doubles finals, mixed doubles final, women’s singles final and men’s singles final.

This week’s guest on ABC‘s Woman In Question is theologian-author Barbara Thiering, discussing women’s issues including abortion, sexist attitudes both in the church and the community, and sexual discrimination.

Sunday night movies are The Wrath Of God (HSV7), On The Buses (GTV9) and Shoot Out (ATV0). Later in the evening, GTV9 screens movie classic A Streetcar Named Desire and after midnight runs a marathon of Barbara Stanwyck films – California, The Bride Wore Boots and Trooper Hook.