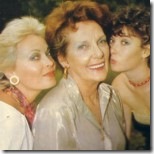 Sons And Daughters, the ’80s soap opera that made sepia tones fashionable with its signature closing sequence, is coming back for another airing on the Seven Network.

Starting midnight this Wednesday night – or if you like, very early Thursday morning – Seven is trotting out another repeat screening of the long-running saga that originally ran from 1982 to 1988 with a cast including TV Week Gold Logie winner Rowena Wallace, soapie stalwarts including Pat McDonald, Cornelia Frances and Anne Haddy, ’60s pop idol Normie Rowe and ’70s sex symbol Abigail.

Sons And Daughters created storyline twists usually reserved for melodramatic US fare, including the show’s original premise which saw a blooming love affair between John Palmer (Peter Phelps) and Angela Hamilton (Ally Fowler) cut short when it was revealed that they were long-lost brother and sister – quite a bizarre twist if not somewhat disturbing!

A later bizarre twist came when Rowena Wallace decided to leave the series, but instead of killing off her character, Patricia Hamilton-Morrell, the writers instead had the character transformed by plastic surgery while overseas, and would return with a new identity, Alison Carr (Belinda Giblin).  The situation got even more murky when, in the show’s dying stages, Wallace then returned to the series, reprising the original Patricia character and set to clash with her apparent alter-ego Alison Carr.  But in true soap opera fashion, another twist revealed that Wallace’s character was now Pamela Hudson, the twin sister of Patricia Hamilton.

It is unclear whether Seven is starting the series from episode one, or picking up where the last re-run left off when it ended abruptly over a year ago when it was being shown in a morning timeslot.  Though, given that Sons And Daughters ran for 972 episodes, and Seven appears to be committing only to one episode a week in this re-run, fans can look forward to seeing the series wrap up sometime in the year 2025! 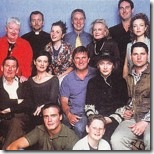 Other Aussie retro re-runs include GP on ABC1, Something In The Air (pictured) in prime-time on ABC2, Water Rats on Nine, and the collection of dramas from Crawford Productions, including Matlock Police, Skyways, Division Four and Carson’s Law, being shown on regional WIN Television.

Permanent link to this article: https://televisionau.com/2008/07/80s-soap-icon-back-for-another-run.html