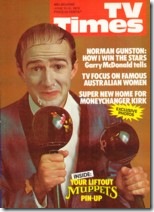 Cover Story: Norman’s ConquestsPrior to the new series of The Norman Gunston Show on the Seven Network, actor Garry McDonald tells TV Times about the perils of the celebrity interviews of his alter ego – but the actor says that only one interviewee became really annoyed: film director Ken Russell. As McDonald recalls, “I asked …