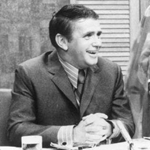 Michael Williamson, sporting commentator and TV compere of the 1960s and 1970s, has died at the age of 90.

Williamson had worked at radio stations 3AK and 3AW before joining HSV7, Melbourne, in the late 1950s. He was one of the channel’s first football commentators and also hosted the weekly panel show Football Inquest.

His most defining moment came at the 1970 VFL Grand Final, when Carlton star Alex Jesaulenko took the mark of the century over Collingwood’s Graeme Jenkin: “Jesaulenko, you beauty!”

Williamson also covered other sports, including the Australian Open tennis.

As well as his work in the sports genre, Williamson also co-hosted the long running variety show Penthouse Club with comedienne Mary Hardy. Starting in 1970, The Penthouse Club featured variety interspersed with regular crosses to the harness racing “trots” around Melbourne and, from 1973, the weekly Tattslotto draw.

Williamson left The Penthouse Club in 1977 but reprised his role when ATV10 picked up the format in 1980 and relaunched it as The Saturday Night Show with Annette Allison.

Permanent link to this article: https://televisionau.com/2019/05/obituary-michael-williamson.html