Veteran journalist and producer Mike Willesee has died at the age of 76.

He been diagnosed with throat cancer in 2016.

Perth-born Willesee was the son of politician Don Willesee. His TV career started as a reporter and presenter of Four Corners and This Day Tonight for the ABC back in the 1960s (pictured), and was the first host of the original A Current Affair when it debuted on Nine in November 1971. Although serious current affairs had been done on commercial TV before it was still largely seen as the domain of the ABC, though Willesee and A Current Affair in its original form did much to change that perception.

A Current Affair also made a star of Paul Hogan, then a rigger on the Sydney Harbour Bridge who offered humourous commentary on the news and went on to much greater things.

Willesee later left Nine after a disagreement with management and had a stint as news and current affairs director at the 0-10 Network, where he assembled a team for a new current affairs show, 24 Hours, and also presented a weekly interview program, The Willesee Show. 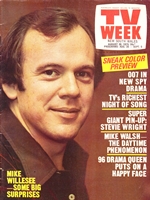 He joined the Seven Network in 1975 to host the first Australian series of This Is Your Life and then the long-running nightly current affairs program Willesee At Seven. The program claimed victory over A Current Affair in the 7.00pm current affairs battle when ACA was axed in 1978.

Willesee At Seven was later to become Willesee ‘81 and Willesee ‘82, then he produced documentaries for the network. One of his star interviewees was Quentin Kenihan, the young boy with bone disease osteogenesis imperfecta and a cheeky wit that outsmarted Willesee. The pair reunited 30 years later in 2012:

After Seven, Willesee returned to Nine in 1984 to revisit the nightly current affairs genre with Willesee as well as producing specials for the network, winning a TV Week Logie for Most Popular Documentary in 1986. Willesee was the predecessor to the revival of the A Current Affair brand when Jana Wendt took over as host in 1988 – with Willesee later returning as a guest host on occasions before being appointed Wendt’s successor in 1993. His interview with then Liberal Party leader John Hewson is said to have lost the Liberal Party the upcoming federal election by highlighting the confusion over the party’s proposed Goods and Services Tax (GST).

He created public outrage when conducting a live phone interview on air in 1993 with two children who were being held hostage by their father.

He also created controversy while appearing to be intoxicated one night when hosting the show. 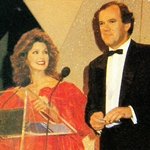 He returned to the Seven Network, reporting for Sunday Night, in 2012. His first interview for the program was with Prime Minister Julia Gillard.

In 2017 he was inducted into The Australian Media Hall of Fame and was the subject of a two-part episode of Australian Story.

Permanent link to this article: https://televisionau.com/2019/03/obituary-mike-willesee.html