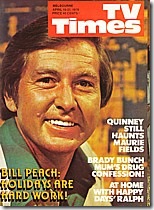 Kennedy, denies rumours that he will be seeking to move Kennedy’s Blankety Blanks to another Melbourne channel following public criticism of Melbourne’s ATV0 by Kennedy. “That’s ridiculous,” Miller told TV Times, “after all, we do have a contract with them and we’re in no position to be talking about going somewhere else.” Now in its second year, Blankety Blanks continues to win the important 7.00pm timeslot in Sydney but struggles in Melbourne. Both Miller and an ATV0 spokesman confirmed that there had been criticism over the channel’s lead-in program to Blankety Blanks, the lower-rating game show $30,000 Treasure Hunt, but this situation had been rectified with the recent expansion of the local Eyewitness News to a one-hour format.
Gunston in harness with Ben Hur! 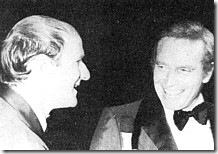 Norman Gunston (Garry McDonald) interviewed Hollywood great Charlton Heston for his Hollywood special to air on the Seven Network: “Did you ever run across my Aunt Naomi, Ben.. sorry Mr Heston. She and Uncle Remo live in Malta, which can’t be that far from your old stomping ground.” (A rather timely interview, given that Heston passed away this same week, thirty years later.)

Mary takes a risky trip:
Ernie Sigley, who recently filled in for Mary Hardy (pictured) on HSV7‘s Penthouse ’78 while she was covering the Academy Awards for radio 3AW, could be a regular co-host with Hardy on the Saturday night variety show. However, this week’s co-host for Penthouse ’78 is Willesee At Seven reporter Paul Makin which could be interesting as after the last time Makin appeared on the program, Hardy was quoted that he would be back “over my dead body.” 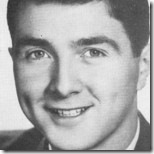 Philip Brady’s wild party:It was a reunion of many of Melbourne’s radio and TV personalities when Philip Brady (pictured) celebrated his 20th year in the business. Among the celebrities gathered at the party were Joff Ellen, Happy Hammond, Jack Little, Evie Hayes, Tommy Hanlon Jnr, interstate guests Mike Walsh and Jimmy Hannan, and GTV9 personalities Eric Pearce, Vi Greenhalf and Pete Smith.
Viewpoint: Letters to the Editor:“Thank goodness Graham Kennedy lost his voice on Blankety Blanks! The show, such as it is, was much better without him acting the ass. The gentleman who took his place was a great improvement.” E. Allen, NSW.
“I thought Marcia Hines’ Music was great. It was really good to see our queen of pop doing a show such as that. She is a fantastic singer and feeds good publicity. I hope she will be coming to Brisbane soon.” C. Close, QLD.
“There’s this commercial for a well-known brand of fly spray: a father and son come inside for lunch. The father spots a fly, which is quickly dispatched with the aid of the fly spray. Then follows a homily, from the father, about dirty disease-carrying flies, following which both father and son sit down to eat without washing their hands!” A. Dickens, NSW.
What’s On (April 15-21):ABC presents the final episode of Marcia Hines’ Music, featuring guest stars Johnny Farnham and Linda George.
Weekend sport includes Saturday night VFL replays on ABC and HSV7, Sunday afternoon VFA Football on ATV0, and Australian Sports Sedans on ABC.
GTV9 presents the British Film And TV Awards to be hosted by Susannah York and Andrew Gardner with an appearance by the president of the British Academy of Film and TV Arts, Princess Anne.
Sunday night movies are Street People (HSV7), Once Upon A Time In The West (GTV9) and The Last Summer (ATV0) up against another episode of I Claudius on ABC, followed by The Tinder Box, a ballet based on the story by Hans Christian Andersen.
Source: TV Times (Melbourne edition), 15 April 1978. ABC/ACP