Bill Peach, former journalist and TV and radio presenter, has died at Sydney’s Royal North Shore Hospital at the age of 78.

Born in the NSW town of Lockhart in 1935, Peach began his career as a cadet at ABC radio in the late 1950s.  After a stint working overseas at the BBC he returned to Australia in 1965 to host Telescope, a nightly current affairs program launched by Sydney’s new channel TEN10.

The Telescope experiment was short lived, with Peach soon returning to ABC to work on Four Corners and, in 1967, take on a career-defining role as host of This Day Tonight.

At a time when Australia was going through an era of social and political change, This Day Tonight (or TDT) was a popular outlet in covering current affairs.  The program’s often-controversial nature made it a target for criticism from politicians, who often accused the program of bias, and cause for headaches for ABC management.

Peach hosted TDT through until 1974 — and was awarded a TV Week Logie in 1975 for Outstanding Contribution to Television . 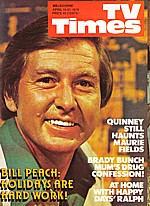 His next career move was to involve his love of travel — hosting documentary series Peach’s Australia in 1975, followed up with Holiday from 1977.

He was awarded an Order of Australia medal in 1991 in recognition of his services to media and tourism.

Bill Peach was a courageous, pioneering journalist who believed the ABC had a duty to make sure the Australian people saw the important stories every night of the week.

From the word go, back in April 1967, Bill Peach was the serene, implacable face of This Day Tonight. He worked with a script and without a script and in his eight years at the helm, the program broke more ground, created more controversy and caused ABC management more trouble than any other program in the ABC’s history — for this alone, every Australian is in his debt.

Bill Peach is survived by his partner Pam and his children Meredith and Stephen. Wife Shirley died in 1997. Permanent link to this article: https://televisionau.com/2013/08/obituary-bill-peach.html