By the end of 1976, the 0-10 Network‘s former flagship dramas Number 96 and The Box were coming to the end of their reign.

Number 96 producer Bill Harmon hoped to fill the inevitable gap that was to come with a string of spin-off projects featuring key members of the Number 96 cast.

None of the proposed concepts would come to fruition despite “pilot” episodes being incorporated among existing Number 96 storylines.

Crawford Productions, makers of The Box, had just launched The Sullivans for the Nine Network and sought to replace The Box for 0-10 with Hotel Story.

Billed as a sort of adults-only sex-and-sin, “Love Boat“-style drama, Hotel Story promised a regular cast of characters and a passing parade of guest roles checking in and out of the luxury inner-city hotel and providing their own self-contained dramas. 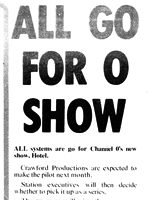 Production of the show’s pilot was completed towards the end of 1976, with interior scenes filmed at the studios of Melbourne’s ATV0 and the hotel exterior based around the then Old Melbourne Inn in North Melbourne.

Drama struck on the eve of production in May 1977, when a change to the show’s structure was made at the last minute. The emphasis on sex was out, and a more conservative approach to stories was in. The series was now being commissioned to run as two episodes a week for thirteen weeks, at a reported cost of $1 million to the 0-10 network.

The sudden change in approach left a number of actors that had been lined up for guest roles left out of a job. There had also been troubles with Actors Equity, largely based around the fee being paid to Lawson in comparison to the show’s Australian actors.

But more controversy was to come. Just weeks after Hotel Story was in regular production, the network axed the show — before a single episode had gone to air and with only seven of the planned 26 completed.

TV Times reported that while the actors had been working away in one studio, network executives were viewing the completed first episodes in a nearby boardroom — and did not like what they saw.

Even after the network pulled the pin it was 72 hours before the actors learned of the show’s fate. “We were the last to be told and so far can only go on what has been written in the press,” Terence Donovan told TV Times.

The network denied press reports that Graham Kennedy, the host of the top-rating game show Blankety Blanks who had been doubly hired as a programming consultant for the network, personally engineered the axe to be made to Hotel Story plus other network shows hosted by Ernie Sigley and Vi Greenhalf.

“Graham is on contract to us as a consultant and we value his opinion, but we don’t have him sitting around previewing our programs and deciding whether they will go on or not,” a spokesperson for ATV0 told TV Times.

Kennedy was, however, believed to have been in the boardroom with the executives viewing the preview episode of Hotel Story. His was not the casting vote but he was known to have offered feedback on the program.

Given the media attention around the show’s production woes, ATV0 saw an opportunity to cash in on the controversial axing of the project. It hurriedly rushed the first episode to air — assisted by newspaper advertisements featuring a collage of some of the press headlines regarding the show and the punchline, “You be the judge”. Some of the further completed episodes aired over the following weeks. 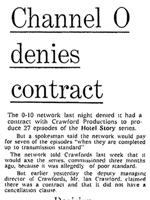 Although Crawfords had produced some successful titles for the 0-10 network in previous years such as Showcase, Matlock Police and The Box, it now wasn’t a good time for relations between the two parties. While Crawfords was checking its contracts for any financial compensation for 0-10 withdrawing its support for the series — and ATV0 even denying that a contract existed — the company had been proposing another drama series for the network.

A historical series titled The Wool Kings had been agreed in principle by TEN10 in Sydney and ATV0, although timing of the production was not agreed on between the two network partners.

If any upside was to be found from Hotel Story, it’s that guest star June Salter was to win a Sammy Award for Best Actress In A Single TV Performance later in the year.

The 0-10 Network did recover from Hotel Story with a new soapie, The Restless Years, that debuted in December 1977 and was produced by the Reg Grundy Organisation (makers of The Young Doctors).

At the risk of history repeating itself, Crawfords and 0-10’s successor the Ten Network actually dared to revisit the basic concept of Hotel Story years later but adapted to a tropical island setting — Holiday Island.

Holiday Island, similar to Hotel Story, featured regular cast storylines interspersed with the dramas of the tropical island resort’s visiting guests. The series, produced in 1981, was to be a TV disaster of another kind. Even though the show’s opening titles were filmed in tropical Queensland, the biggest blunder was filming a series set in the tropics in the cold of Melbourne during winter.

Viewers were also not convinced by some unusual casting plus attempts to make Melbourne’s gloomy winter landscape resemble a palm tree-laden tropical paradise.

Some dodgy green-screen effects, actors having to suck on ice blocks to stop their breath being visible in the cold air, and a fake tropical cyclone for dramatic effect didn’t help, either.

Permanent link to this article: https://televisionau.com/2017/07/the-short-saga-of-hotel-story.html