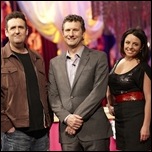 After seven years and 277 episodes, the team from ABC’s Spicks And Specks announced yesterday that the show’s current season will be its last.

“I have loved every second of my involvement with Spicks And Specks, and especially working with Alan and Myf. We always said we wanted to leave when we were on top and while we were still having fun, and now feels like the right time.  We are indebted to our loyal fans for giving us seven amazing years on Australian television, and I hope they’ll hold the memories of Spicks And Specks close to their hearts.”

Team captain Myf Warhurst said the show has allowed her some great experiences:

“It’s been a wonderful privilege to be part of Spicks And Specks. I’ve worked with an incredible team of people, both on and off screen, and miraculously, managed to keep a job on TV for seven years, on a show that people love.  I’ve been lucky enough to experience many great things. I’ve seen Frank Woodley‘s privates, been naked under a desk with Pete Murray, and met many of my childhood musical crushes. Life can’t get much better than that, so this seems like the perfect time to wind things up.”

Fellow team captain Alan Brough said it was best to walk away too soon rather than too late:

“For seven years I’ve had a job where I’ve met Gourd Orchestras, Oompah bands and Status Quo. Very few people can say that.  I’d rather people were upset because we stopped a little early, than upset because we stayed far too long.”

Recorded at the ABC studios in Melbourne (in the same studio that hosted Countdown) the show began rather modestly back in February 2005, only a week after another music-based quiz show, RocKwiz, had debuted on SBS.  There were inevitable comparisons between the two programs, especially as both shows were hosted by comedians and comprised a three-on-three battle on questions related to music, but it was evidently clear that both have their own distinct style.

Spicks And Specks became a popular performer in its Wednesday night timeslot on ABC and was the springboard into a Wednesday night comedy and youth-oriented line-up for the network.  With the popularity that Spicks And Specks was attaining, it was inevitable that a string of similar team-versus-team shows would follow on various genres – history (ADbc), sport (The Squiz, The Locker Room, Between The Lines), television (The White Room) and popular culture (Talkin’ ‘Bout Your Generation, You May Be Right) – though few have been a success.

The show was recognised this year with a TV Week Logie Award for Most Outstanding Light Entertainment Program, and host Adam Hills has been nominated for the Gold Logie four times since 2008.  This year saw Hills launch his own talk show, Adam Hills In Gordon Street Tonight, which will return for a second series.  ABC is also in discussions with Warhurst and Brough over potential future projects.

The final episode of Spicks And Specks is scheduled to screen on ABC1 on Wednesday, 23 November at 8.30pm.

Permanent link to this article: https://televisionau.com/2011/05/seven-year-itch-for-spicks-and-specks.html