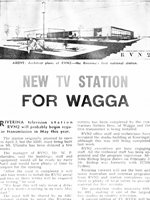 Today marks the 50th anniversary of the official launch of station RVN2 (now a branch of the Prime7 network), based in Wagga Wagga and serving the Eastern Riverina and South Western Slopes districts of New South Wales.

Television was not entirely unheard of in the region — as keen viewers could get distant signals from other stations such as GMV6 (Shepparton), CTC7 (Canberra) and CBN8 (Orange) — but would now have their own local station, to be joined later by ABC‘s new local station ABMN0.

The licence to operate RVN2 was awarded to Riverina Television Limited in October 1962. The company was owned by a consortium of local shareholders including radio stations 2WG and 2LF and newspaper The Daily Advertiser.

RVN2, sharing a transmission tower with ABC atop Mount Ulandra, was declared open at 7.00pm on Friday, 19 June 1964. The opening night broadcast started with the Royal Australian Engineer’s Band playing the Australian National Anthem from the grounds of the RVN2 studios in Lake Albert Road, Kooringal, before station presenter Paul Griffiths introduced the station to viewers. Variety series The Frank Ifield Show, documentary Hollywood: The Golden Years, a five-minute news bulletin read by Griffiths, the movie The Dam Busters and a Jack Benny special completed the opening night’s line-up.

In 1971 RVN2 completed a merger with Albury station AMV4. The transaction led to both stations adopting a uniform program schedule, which would ultimately be co-ordinated from Wagga Wagga.

The 1980s saw RVN-AMV form a partnership with fellow regional stations CBN8-CWN6 to form The Prime Network. The partnership was later formalised with the two pairs of stations coming under the common ownership of Ramcorp Ltd.

In preparation for the upcoming aggregation of regional markets The Prime Network, later Prime Television and now Prime7, struck up an affiliation with the Seven Network for the supply of programs. Aggregation saw RVN2’s operations ‘de-merged’ from AMV and instead linked to CBN8-CWN6 to form the network’s Southern NSW outlet with aggregation, and expanded its signal into the Wollongong and Canberra markets in March 1989. Wollongong’s WIN and Canberra’s Capital Television (now Southern Cross Ten) reciprocated with expansion into the Prime coverage area from December 1989.

Production of Prime7’s local news bulletin for Wagga Wagga was shifted to the network’s Canberra studios in 2010, and longtime newsreader Doug Hogan, who joined RVN2 in 1982, read his last bulletin in 2012. He is now Prime7’s Network Director of News.

At one time RVN2 employed over 100 people at the Lake Albert Road premises. With the development of networking and the shift in production of the local news to Canberra, there are now only 14 employed by Prime7 at the site. The building, which also houses radio stations 2WG and Star 93.1 FM, is in the process of being sold. The station will maintain a local presence at a new location.