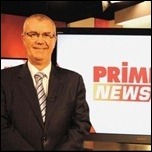 Starting out in 1974 as a cadet reporter for the Cootamundra Herald in his home town, Hogan later ended up at radio station 2LF in Young in 1976.  He made the move to television in 1982, joining Wagga Wagga station RVN2 (now a branch of the Prime7 regional network) as a senior reporter for the local news as well as hosting children’s game show TV Powww!

Hogan then progressed to the role of sports editor and then news editor and, in 2002, took over as newsreader.

In 2010, Hogan moved to Canberra when studio production of the Wagga Wagga bulletin shifted to Prime’s centralised studio facility in the national capital.

Although he has stepped away from the news desk Hogan will continue to work behind-the-scenes at Prime7 News as deputy network news editor – overseeing the production of the network’s local news bulletins across NSW, Victoria and GWN7 in Western Australia – and editor of Prime7’s Orange and Dubbo news bulletins.

Hogan has told the Cootamundra Herald that he leaves the newsreading role with happy memories:

“I’ve had a ball doing a job that I never imagined I could ever do, I somehow turned the improbable into a reality. It’s been a real thrill every day that I presented the Sport or read the News over the past 30 years.”

“I’ll miss it for sure, but I take with me life-long memories of my storytelling days on the box. I’ve shared a special experience with the people of the Riverina and south-west and loved every minute of it, but for now, Hooroo!”

Starting Monday, Prime7 weather man and presenter Daniel Gibson will take over as newsreader for the Wagga Wagga edition of Prime7 News.

Permanent link to this article: https://televisionau.com/2012/03/hooroo-from-prime7-newsreader.html