Lochie’s Getaway gig
Lochie Daddo has been announced as David Reyne‘s replacement on travel show Getaway. “Travelling is one of my favourite pastimes and now they are paying me to do it,” he told TV Week. His first story will screen on the show’s ‘Australia On $50-A-Day’ special to go to air in early July. But while Reyne quit Getaway at the end of last year out of frustration at the show’s strict production guidelines, he will be back as a guest reporter. “Other people (at Nine) would look at stories I’d done and say, ‘That was great’, but I’d be saying, ‘No, it wasn’t great at all’. There just wasn’t enough time to do stories properly,” he said. “But when it was suggested to me that I could go back to do a series of stories the way I wanted to do them, I thought that was amazing and agreed to sign up for another ten weeks.”

Horsing around in pantyhose! 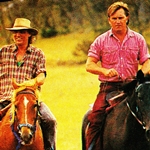 Old rockers, and mates, Frankie J Holden and Jon English took to the Snowy Mountains for a three-day trail ride through the lush pastures of Reynella, close to the northern end of the Kosciusko National Park, for The Great Outdoors. But days of horse riding can cause a nasty case of chasing — so out come the fishnets! Holden may have appreciated the relief on his aching legs but English, the more experienced horseman dating back to the days of making mini-series Against The Wind, gave them a miss. “Theoretically, it’s right to wear pantyhose,” he told TV Week. “But fishnets are a bloody ridiculous idea.” 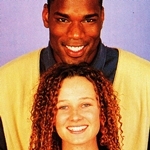 War on the streets
The quiet, middle-class street depicted in Neighbours couldn’t be further from guest star Christopher Kirby‘s own background. Kirby was raised in the tough south-central section of Los Angeles. Most of his school friends are either dead or in jail, and two of his brothers were murdered. Kirby would use television as an escape. “I grew up on its fantasies and I always thought that life could be a little better than it really was,” he told TV Week. He first came to Australia on holiday in 1989 but has since returned to work. As well as appearing on stage in The Rocky Horror Picture Show and on ABC‘s The Damnation Of Harvey McHugh, he has just finished a pilot for a new US series, Kansas, being filmed on the Gold Coast. He joins Neighbours as Drew Grover, the American boyfriend Cody (Peta Brady) left behind when she returned from being an exchange student. Everyone in Ramsay Street is shocked to discover that Cody and Drew are actually married.

“It is customary for the television networks to issue releases of their weekly program “highlights”, sometimes detailing the storylines of the various soaps. We were left in breathless anticipation here by a recent revelation of events unfolding on the Seven Network‘s Home And Away. “Irene is shocked to discover a cow in her backyard,” said the blurb. Now that’s a plotline I bet they’ll milk.”

Wednesday: In Heartbreak High (7.30pm, Ten), Southgate (Tony Martin) is having some emotional problems at home and school and seeks Yola’s (Doris Younane) help — and Yola is in a predicament herself by seeing a married man, which causes some tension with Christina (Sarah Lambert). In Hey Dad! (8pm, Seven), when Ben’s (Ben Oxenbould) girlfriend (Cathy Godbold) follows him to Sydney from Taree, he tries to think up ways to fob her off.

Thursday: In Neighbours (6.30pm, Ten), Doug (Terence Donovan) visits the urologist and is told he requires an operation. In Home And Away (7pm, Seven), Jack (Daniel Amalm) and Selina’s (Tempany Deckert) romance hots up. Beyond 2000 (7.30pm, Ten) looks at VR Hornet, the arcade game of the future; and visits the one man crew who does everything on a 24 hour news station. Former Australian test cricketer Mike Whitney hosts the new series The Innovators (8pm, ABC), covering topics that celebrate innovation, ingenuity and inventiveness. The one-hour special The Beatles In Australia: 30th Anniversary (8.30pm, Nine) looks at The Beatles‘ historic tour of Australia in 1964 and features footage from one of the Melbourne concerts.