It was 80 years ago today (1 July 1932) that Australia’s national broadcaster — ABC — was officially opened by Prime Minister Joseph Lyons.

The Australian Broadcasting Commission — as it was then — initially comprised of twelve existing radio stations, covering each State capital city as well as Newcastle, Corowa, Rockhampton and Crystal Brook (Port Pirie).  The radio network then expanded across Australia, including Canberra and Darwin joining the network in 1938 and 1947 respectively.

In the 1950s the Australian Broadcasting Commission was given the responsibility of setting up Australia’s national television service and officially launched ABN2 Sydney on 5 November 1956, followed by ABV2 in Melbourne two weeks later — just in time to cover the Melbourne Olympic Games.

ABC then expanded television services into Brisbane in 1959, Adelaide, Perth and Hobart in 1960, and Canberra in 1962.  The first regional ABC station, ABEV1 Bendigo, debuted in April 1963. 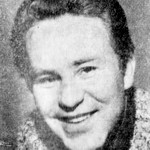 Play School debuted in 1966 and Australia’s first evening drama serial Bellbird launched in 1967 and ran for over a decade.

Darwin was the last capital city to receive ABC television in 1971.

A generation after Six O’Clock Rock, ABC again created a TV icon with Countdown from 1974.

The sexual revolution of the Seventies wasn’t ignored by ‘Aunty’ ABC, either.  Alvin Purple, starring Graeme Blundell, was based on the earlier R-rated film of the same name.

Garry McDonald created Logies history when his comic alter ego Norman Gunston became the first (and so far) only fictional character to win a TV Week Gold Logie in 1976, and a decade later McDonald and Ruth Cracknell formed a perfect double act in the comedy series Mother And Son.

By the late 1980s Countdown had made way for Rage, while journalism was coming under the spotlight in Media Watch.

The D Generation made their TV debut with a sketch comedy series on ABC in the mid-1980s.  The team moved to the Seven Network but then returned to the national broadcaster with the Saturday night The Late Show in 1992-93 and current affairs satire Frontline from 1994.

Mini-series Brides Of Christ created ratings history for the ABC in 1991, and by the end of the decade Seachange had also given the network one of its most popular dramas of all time.

Australia Television, the ABC’s venture into the Asia-Pacific region, was launched in 1993.  It is now the Australia Network.

ABC was the Australian broadcaster for the global television event 2000 Today, covering New Year celebrations from around the world.

Digital television launched in 2001 and while digital channels ABC Kids and Fly TV were only allowed a short life, the national broadcaster has since presented a more robust multi-channel offering with ABC2, ABC3 and 24-hour news channel ABC News 24. 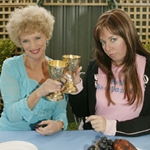 Although they were a creation of commercial television, those foxy morons Kath And Kim (pictured) became a modern-day comic phenomenon with their series debut on ABC and became one of the few Australian concepts to be adopted by a US network.

Wednesday nights were dominated for many years by quiz show Spicks And Specks and Chris Lilley‘s We Can Be Heroes and Summer Heights High were comic highlights.

The last few years have also given us popular shows including Enough Rope With Andrew Denton, The Chaser’s War On Everything, the various Gruen franchises, Q&A, Paper Giants: The Birth Of Cleo and The Slap.

In celebrating its 80th birthday, ABC has a number of projects including online videos and galleries, a digital radio station, public exhibitions and a series of classical symphonies.  Details of these and more can be found at the ABC 80 Years website.